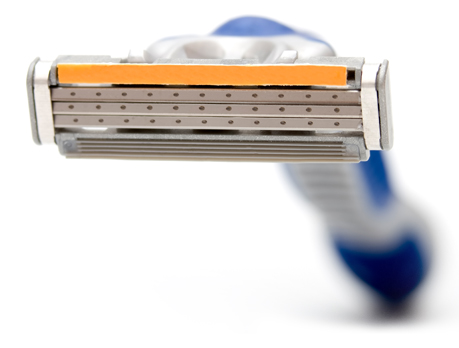 Things are not made for the sake of words, but words for things: A patent may cover a plurality of blades, or perhaps only three.

The Importance of Wording in Patent Claims

Since words can be imprecise, patent claims often can be difficult to construe. This is true even in cases involving fairly simple technology, where ambiguous words (or, in the following case, numbers) breed controversy.

One problem for Energizer is the patent law maxim that additions to a patented device typically still constitute patent infringement. In other words, to not infringe, you generally have to take something away from what is claimed in a patent and replace it with something else.

So, the Gillette case was more about whether a second blade between a first and a third blade, as stated in Gillette's patent, encompasses two "second" blades rather than about whether four includes three. Gillette's patent specification, which was used to interpret the claim, included approximately 30 references to three blades and no reference to a four-bladed razor. That fact initially sealed Gillette's fate when the Federal District Court in Boston refused to issue an injunction against Energizer in January 2004.

The case then went to Washington, where the U.S. Court of Appeals, in a 2-1 decision, said the district court erred in construing Gillette's patent as precluding the addition of a fourth blade, or, more accurately, two "second" blades. Two justices found favor with Gillette's patent specification where it once refers to a "plurality" of blades, meaning there could be more than three.

The United States Supreme Court does not often hear patent cases, but when it talks about patents and the nature of language, it can be revealing.

This is from one Supreme Court opinion: "Unfortunately, the nature of language makes it impossible to capture the essence of a thing in a patent application .... A verbal portrayal [of an invention] is usually an afterthought written to satisfy the requirements of patent law. This conversion of machine to words allows for unintended idea gaps which cannot be satisfactorily filled. Often an invention is novel and words do not exist to describe it. The dictionary does not always keep abreast of the inventor. It cannot.

"Things are not made for the sake of words but words for things .... The language in the patent claims may not capture every nuance of the invention or describe with complete precision the range of its novelty."

That was in a 2002 ruling. In 1892, the Supreme Court stated that "the specification and claims of a patent ... constitute one of the most difficult legal instruments to draw with accuracy." To both of these quotes, patent attorneys like me say, "Amen."

Perhaps the real question in the Gillette case, then, is whether Gillette's patent claim fairly portrays the possibility that there could be a fourth blade. Stated another way, given the imprecision of language, if the Gillette patent does not explicitly preclude the addition of a fourth blade, then maybe the two justices siding with Gillette got it right. On the other hand, how is Energizer, as a competitor, supposed to know what does and what does not infringe Gillette's patent? This is a real tension in patent law.

Still, all hope is not lost for Energizer. At the trial court of the Gillette case, Energizer raised other defenses to the patent. Since, for example, the law of the case is now that Gillette's patent encompasses a razor with two "second" blades, if Energizer can show a prior razor with that configuration, Gillette's patent might be found invalid.

The trial court had to decide if Schick's other defenses, such as the assertion that Gillette's patent is invalid, have merit and whether Gillette is entitled to an injunction and, ultimately, damages. At that point, the only likelihood, absent a settlement, was at least another appeal—hey, no one said it was easy.

[Adapted from "Does 4 Include 3?" by Kirk Teska, Law Firm of Iandorio & Teska; and Suffolk University Law School, for Mechanical Engineering, January 2006.]

The United States Supreme Court does not often hear patent cases, but when it talks about patents and the nature of language, it can be revealing.