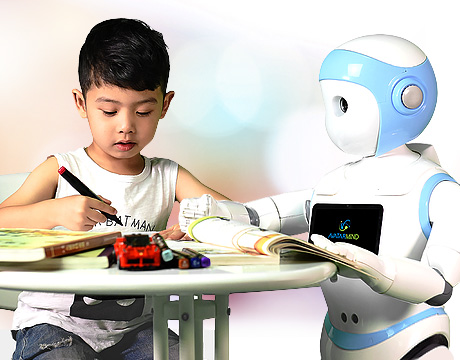 A new robot may be a fun companion for children and the elderly. Image: AvatarMind

It’s true that loneliness is not something that can always be avoided. But a new branch of robotics is seeking to make it a rarer condition than ever with human-like robot companions. And the new “iPal” is one such robot, designed to help with the gloom. However, that name doesn’t nearly encompass all of the functions of this robot friend, as it is also a teacher, an entertainer, and even a health assistant.

“I don’t think people always envision the elderly when they imagine what robotics can do, but it actually may be one of its greatest gifts,” says John Ostrem, CEO and Co-Founder of AvatarMind, the manufacturer behind iPal. “We’ve done support-type tests in assisted elder care facilities and they have problems, one being a limited number of caregivers for many residents. Caregivers were interested because it could provide additional attention and one-to-one companionship for residents. The robot can remind them when it comes to their medicines and can lead them in physical therapy exercises on a customized basis. It could even in the future maybe help with simple medical tasks, such as taking blood pressure and more.”

The robot has 24 motors and 10 degrees of freedom in the shoulder, he says. “There are multiple sensors,” according to Ostrem, who has a Ph.D. in electrical engineering from the University of California. “There’s a directional array, determining where a sound came from. It has touch sensors to turn the robot on or off and there might eventually end up being short cuts for certain things you want the robot to do, like follow you. Other sensors on the body are for medium-range obstacle detection and around the bottom of the base are infrared sensors for short-range obstacle detection.”

It moves around with the aid of four wheels. We didn’t build a walking robot because of a matter of cost," Ostrem said."Right now, we’re trying to keep it at $1,500.” It’s designed with a low center of gravity, he says, which make it more difficult for someone to push it over. “It weighs around 27-28 pounds and is three and a half feet tall,” he adds.

Ostrem says the bot can even potentially help when it comes to working with autistic children.

“A goal of therapy is to help in interacting with people and iPal could assist here,” he says. “It doesn’t just have a screen to teach but can show with its own gestures to help ease their [a patient’s] way into human interactions. Even in speech, it can help. You can use different modalities to institute therapies in different ways.”

But another aim is to give youngsters a stronger understanding of science and robotics and possibly even encourage them to learn programming. “We have the thought of teaching a child enough to one day program the robot themselves if they’d like,” he says. “They could go through developers like APIs [application programming interfaces] and develop their own applications. It can be more than just having an iPal, they can learn some things in the field and who knows where they can take it?”

Not Just About the Patient

iPal has already had a series of prototypes and was demonstrated at CES, but the real test will be out with consumers.

“We hope iPal will be a friend to both the person using it but maybe also for the one who buys it for them,” Ostrem says. “The one with an elderly parent who has to work and could use a little help with giving them companionship. The parent who has a child who wants to expand their learning. iPal can never replace human beings, but it could hopefully add to their lives.”

iPal can never replace human beings, but it could hopefully add to their lives. Dr. John Ostrem, CEO, AvatarMind