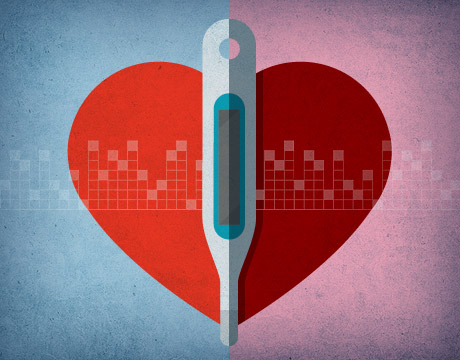 The scenario is all too common: Thanksgiving dinner is nearly complete. You’ve had seconds of the cranberry sauce, mountains of mashed potatoes, white and dark meat several times over, and pie slices apple and pumpkin, when suddenly you are struck by a constricting, tightening, and somewhat extreme pain in the chest. Do you panic? Or do you merely pop a few antacid tablets and sit back down for yet another slice?

Deliberations like these would quickly come to an end if we could detect a myocardial infarction with the same ease with which we currently detect a fever.

Researchers at Korea’s Pohang University of Science and Technology have done just that. Their heart attack detection device was made to mimic the simplicity, affordability, and readability of a common temperature thermometer.

Thankfully for those in the heart attack detection business, there is a chemical that shows up in the blood only during such a crisis. The protein Troponin I is “only present in the heart muscles; when it’s damaged it’s released,” as Sangmin Jeon, a professor in the department of chemical engineering who worked on the project, puts it simply.

Current methods of detecting heart failure also take advantage of the protein’s release, but tend toward the large, the cumbersome, and the expensive. And they require a higher concentration of troponin in the blood to make a correct diagnosis. Not too convenient for the home, and, more to the point, not too convenient for handing out by the thousands—or millions—in locales where technology, electricity, and money are scarce. “We hope to make a much more convenient one,” says Jeon, “a portable, cheap device that is also very sensitive.”

To do that, he used platinum nanoparticles “functionalized” with troponin antibodies. When combined with troponin, the particles aggregate and ultimately increase the pressure in the vial. A capillary tube containing a drop of ink is inserted through the cap of the vial. The pressure pushes the ink up through the tube, so that the level of troponin in the blood can be read like a thermometer.

The arrangement is preferable to, for example, something similar to a pregnancy test, because it minimizes ambiguity in reading the results. “The key idea is that our eyes are much more sensitive to level changes than color changes,” says Jeon.

And a thermometer is both rugged and cheap. The quantity of the precious metal in each vile is miniscule—a microgram—and not likely to cost more than .01 cents per unit. The current cost of all the materials in a single heart attack thermometer is around 20 cents. “When it’s a marketed item, I don’t know,” says Jeon.

There are few technical impediments to getting the product out to the angina sufferers of the world. One small hurdle to making the thermometer a household item is widespread hemophobia. “It needs blood, a drop of blood. It’s a problem that we have to overcome,” says Jeon, “In the emergency room, yeah, no problem, nurses and doctors can draw it. But everyone else is very afraid of the blood.” Alas, as long as it’s troponin that gives away the cardiac arrest, no saliva sample or prod under the armpit is going to replace a prick for the red stuff.

This, though, is a minor matter, for those wanting a quick look into the heart. It’s also not likely to hold back hypochondriacs—and sufferers—from using similar thermometers for other worries. Just change the antibodies and Jeon’s vial could be used to detect bacteria or cancer, just as simply and just as affordably.

“Most of the technologies these days are very advanced,” says Jeon. “But not so many people can access them. The technology should be accessible by people all over the world. To do that, it should be easy to apply and easy to create economically.”

Most of the technologies these days are very advanced. But not so many people can access them. The technology should be accessible by people all over the world. Prof. Sangmin Jeon, Pohang University of Science and Technology