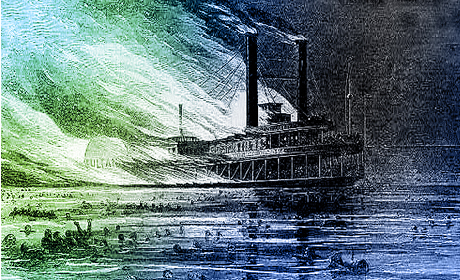 The boiler explosion of the Mississippi River Steamboat Sultana on April 27, 1865 caused one of the 100 deadliest fires ever and claimed more lives than the Titanic. The disaster was overlooked at the time because it occurred just weeks after Lee’s surrender and President Lincoln’s assassination, with most news outlets covering the end of the Civil War, Lincoln’s funeral train, and the hunt for John Wilkes Booth. Also, since the steamship was carrying Union POWs returning home to Midwestern states, the Army and East Coast newspapers were not eager to publicize it.

The loss of an estimated 1500–1900 lives on the Sultana created public demand for safer and stronger boilers, and new legislation efforts began. Those involved in steam power also noticed that huge loss of life due to common boiler explosions, happening as often as every four days in the 1850s, could be prevented if safety improvements were made as larger boilers were being built. The first insurance companies were formed, offering inspections and financial incentives for participating.

A Combination of Causes

The two year-old Sultana was a 260-foot-long, wooden-hulled, twin side-wheel steamer with high-pressure tubular boilers powering two steam engines. The four interconnected boilers were each 18 feet long and 46 inches in diameter, lighter and smaller, but producing more steam than typical steamship boilers of the time. The ship carried the latest safety equipment, including a safety pressure gauge that opened when boiler pressure reached 150 psi.

The ship left New Orleans and traveled for 48 hours to Vicksburg with one boiler bulging and leaking. The captain was short of funds, and rather than waiting three to four days for a replacement boiler, its leak was repaired hastily and poorly, riveting a replacement patch thinner than the original boiler wall.

The privately owned Sultana had been contracted by the government to transport recently released POWs up the Mississippi, and high prices were paid for each officer and enlisted man. The captain, eager to carry this valuable cargo, allowed as many as 2300 soldiers aboard in Vicksburg, more than five times its passenger capacity of 376. They departed hastily and top-heavy. The ship could handle the weight, but not with this distribution, and not with a leaky boiler.

Two days later, after a stop in Memphis and another leak repair, the boiler finally gave way while struggling against an abnormally strong current. Three of the ship’s four boilers burst from an overpressure of steam, producing the effect of an explosion, tearing the nearby furnaces, and scattering hot coals on the midship and the hundreds of soldiers sleeping there. Fire consumed the wrecked ship, and most of those aboard were killed.

It is believed that the ship’s rocking caused water to cascade out of the highest boilers and come in contact with the red-hot iron of under-filled boilers below. Intense steam suddenly developed, producing a surging effect like the firing of gunpowder in a mine.

At the time of the Sultana incident, some states had boiler construction standards, but with a steamship traveling through many states’ waterways, jurisdiction was unclear. The Sultana explosion can be linked with many industry and legislation improvements including safety regulations and inspection services that improved how people work with them:

Debbie Sniderman is CEO of VI Ventures LLC, a technical consulting company.
The privately owned Sultana had been contracted by the government to transport recently released POWs up the Mississippi, and high prices were paid for each officer and enlisted man.