The Greatest Engineering Adventure Ever Taken

The Greatest Engineering Adventure Ever Taken 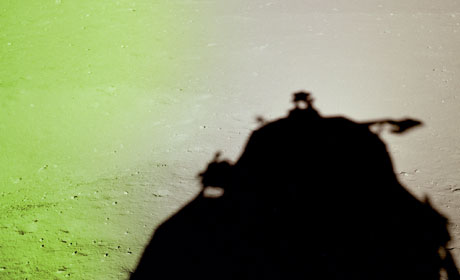 The first picture taken after the Apollo moon landing.

When President John F. Kennedy announced in 1961 his goal of sending a man to the moon, the United States had accomplished exactly 15 minutes of human spaceflight. America’s space program had already absorbed several high-profile embarrassments and the Soviet Union was winning the “space race.” Many thought that the president’s incredibly challenging deadline of a decade was setting America up for another humbling loss.

America’s political/Cold War fortunes were now in the hands of its top engineers. At the moment of Kennedy’s announcement, the technology, infrastructure, hardware, and technical workforce needed to achieve this goal did not yet exist!

The Apollo space program was, of course, a tremendous success—thanks to the 400,000 engineers, scientists, and technicians from more than 20,000 companies and universities who worked on the program. They overcame enormous technological challenges with creativity, innovation, and persistence. Their decisions and designs were sometimes risky, but always well-conceived and, on occasion, elegantly simple.

The first question NASA managers asked was, “How do we get to the moon?” What were the steps for launch, landing, and return? A number of ideas were being considered, including the Lunar Orbit Rendezvous (LOR)—a single launch vehicle that would send a mother ship and landing craft directly to the moon. NASA, however, believed the concept was too complex and dangerous to pursue.

NASA engineer John Houbolt disagreed—he liked the LOR because it would result in a smaller and lighter spacecraft. He went directly to NASA’s leaders in Washington, where his stubborn persistence and convincing engineering calculations finally won the day. By the fall of 1962 NASA had adopted the LOR mission architecture.

The next step was developing a rocket powerful enough to propel the mother ship and lunar landing craft to the moon. Tackling the problem was rocket engineer Wernher von Braun at the Marshall Spaceflight Center in Huntsville, Alabama. Over the next five years von Braun and his team designed, manufactured, and tested the Saturn V.

The Saturn V was a technological leap over anything the U.S. had previously designed. Consisting of three stages with more than 3 million parts, the Saturn V towered 363 feet when fully stacked and produced 7.5 million pounds of thrust.

The first test flight in 1967 went so smoothly that some testing instrumentation was deemed unnecessary for future tests. However, during the second flight three engines failed—a deeply serious problem. Paul Castenholz and his engineering team at Rocketdyne, the engine manufacturer, worked overtime to determine the cause of the problem with no success.

With the weight of the entire Apollo program bearing down on them, engineer Marshall McClure then posed a simple question: “Would it be different in space than on the ground?”

The engineers watched films of their tests and discovered ice built up on the lines carrying super-cooled liquid hydrogen and liquid oxygen. The fluid lines were flexible and susceptible to vibrations. Could the ice be protecting the lines during ground tests? Subsequent testing of the components in a vacuum chamber indeed showed the fluid lines failed “in space.” The engineering solution was easy—by stabilizing the lines with steel mesh, the Saturn V was now ready to carry astronauts.

A landing craft also had to be developed—this responsibility given to Thomas Kelly and his team of engineers at Grumman Aviation.

In initial designs the Lunar Module was simply too heavy. Looking for any place to reduce weight, Kelly focused on the large windows. But these were also critical for giving the astronauts a good field of view as they sat in their seats during the descent. Then somebody asked, “What if we get rid of the seats?”

Kelly called it “a brilliant, paradigm-shifting question.” Seats were not necessary, given the engine thrusts needed to navigate in the weak gravity of the moon. Having the astronauts stand also meant they could be closer to the windows, which then didn’t need to be so large and heavy.

Designing the space hardware was only one part of the overall Apollo team. Thousands of engineers were involved in launch processing and monitoring the flights. In an era when computer systems were primitive compared to what we have today, constant communication between the astronauts and an army of engineers in Houston was critical to ensure the incredible success of the Apollo 11 mission.

Because of this combination of engineering foresight, fortitude, and teamwork, Neil Armstrong and Buzz Aldrin walked on the moon on July 20, 1969. Not only was it a giant leap for mankind, it also established the U.S. as the world’s most technologically advanced country.

[Adapted from “The Most Hazardous and Dangerous and Greatest Adventure on Which Man Has Ever Embarked” by Burton Dicht, Managing Director, ASME’s Knowledge and Community Sector, for Mechanical Engineering, July 2009.]

The first question NASA managers asked was, How do we get to the moon?