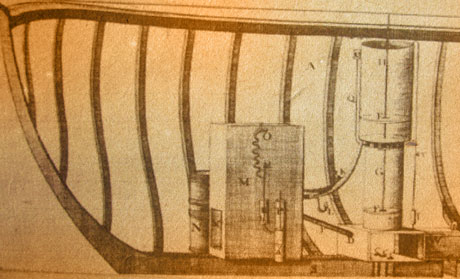 A 1788 sketch by Rumsey shows his propulsion scheme: a Newcomen engine piston connects to the smaller piston of a water-jet pump.

The Genesis of the Steamboat

The person who gets the most credit for an invention is typically not the innovator, but the one who makes the idea pay. Take, for example, Robert Fulton, the “inventor” of the steamboat. The real innovators behind steam propulsion were John Fitch and James Rumsey.

They began meaningful experiments around 1786; Fulton’s successful demonstration with the Clermont did not come until 1807. Fitch and Rumsey are usually dismissed with brief mention when the evolution of the steamboat is discussed; yet their groundbreaking work occurred decades before Robert Fulton won acclaim as the inventor of this transportation breakthrough.

Both Fitch and Rumsey were outstanding innovators. Rumsey was a mechanical genius with an innovative approach to solving mechanical problems. Fitch was a colorful frontier entrepreneur who seemed fated to suffer misfortune throughout his life. They came into direct conflict in 1788 as they fought for the patent protection they both thought they deserved.

The Origin of a Patent War

Their steamboat work can be traced to 1784. Rumsey had the advantage from the beginning; a successful architect and innovator, he had already conceived a design for propelling a boat against river current when George Washington appointed him superintendent of the Potomac River Project. After Fitch’s foundry was destroyed during the Revolutionary War, he became a frontier surveyor, was captured by Indians, and later established a metal-working and clock repair shop.

Both men conceived of boats driven by the Newcomen engine. Fitch was interested in steam carriages and steam rowboats. At that time Rumsey was experimenting with a water wheel placed between the pontoons of a catamaran. The water wheel drove a reciprocating pair of axial carriages that had poles reaching to the river bottom. The flow of water past the catamaran moved the boat forward against the current. Even though this worked, it wasn’t very practical. Rumsey then decided to connect a hydraulic pump piston directly to the piston of a Newcomen engine. He retained the traditional walking beam linkage only to power accessories like water pumps, essentially creating an entirely respectable example of jet propulsion. The pump took in water from near the keel and ejected it at the stern of the boat. Aided by a flexible diaphragm, Rumsey successfully demonstrated this concept in 1787.

While Rumsey was experimenting with jet boats, Fitch continued to experiment with translating the power from a Newcomen engine into propulsive movement. A primitive propeller model had failed and he had gone through a number of paddle arrangements. He found better fortune with an array of paddles at the stern of a boat, broadside to the direction of travel. By moving those fore and aft a usable thrust was created. A boat using this arrangement transported passengers between Philadelphia and Burlington, New Jersey in 1788, while Rumsey continued to promote his jet boat.

Rumsey started a patent war by claiming his boat of 1784 was really a steamboat. The patent laws in the United States were just being developed and were so vague that both men could present what they thought were legitimate claims. They also tried to obtain patents in England, but that country’s laws were equally ambiguous. Fitch and Rumsey then took their debate to the press; Rumsey published a pamphlet claiming invention of the steamboat, which Fitch immediately countered with a published rebuttal.

It appears neither man was entirely above reproach. Rumsey improperly claimed precedence by pretending that his 1784 water-wheel boat was steam-powered. It also appears Fitch improperly claimed to have invented the water tube boiler.

Rumsey’s death in 1792 ended the exchange, although controversy continues today. Unresolved is the question of who invented the boiler, which so greatly increased the efficiency of the Newcomen engine. Fitch’s life went on for six years after Rumsey’s. He was dogged by progressive misfortunes and saw a number of near-successes fail for lack of funding. In desperation he went to France looking for financial support. Fitch died in 1798 by overdosing himself with opium pills after a prolonged but unsuccessful effort to drink himself to death.

Despite their groundbreaking contributions to the concept of steam-powered transportation, John Fitch and James Rumsey are virtually unrecognized because, ultimately, the steamboat was finally raised to financial success in August 1807 by Robert Fulton—whom we all know today as the father of the steamboat.

[Adapted from “The Genesis of the Steamboat” by Robert O. Woods, ASME Fellow, for Mechanical Engineering, April 2009.]

Unresolved is the question of who invented the boiler, which so greatly increased the efficiency of the Newcomen engine.