The Future of Design

The Future of Design 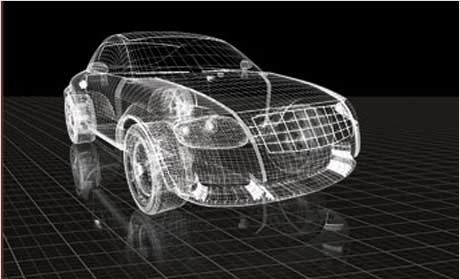 Evolving computer technology promises to change the way engineers communicate with computers and with each other.

There are elements of engineering design that are cruder than they might first seem. The way designers input data into CAD is based largely on how programmers input their code, not what might be most natural. And the place where designers work—the office—may soon be outmoded.

Levent Burak Kara, assistant mechanical engineering professor at Carnegie Mellon, has been developing a pen-like device that he hopes will some day soon take the place of the computer mouse. “The idea is to replace the traditional mouse and keyboard with more natural, human-centric tools,” Kara said. His pen would let engineers use the computer screen like a piece of paper, but with more depth. The difference between Kara’s pen and the pen and tablet long available to graphic designers is the ability to sketch in three dimensions.

The device would have applications beyond engineering. A surgeon, for instance, might perform virtual surgery using the pen in place of a scalpel.

Kara’s idea harks back to the early days of CAD. In 1963, Ivan Sutherland, a student at MIT, created his Sketchpad system. The program used a light pen as an input device. Sutherland believed that for “describing the shape of a mechanical part or the connections of an electrical circuit, typed statements can prove cumbersome.”

So where, then is our Sutherland pen?

“Nongraphical people took hold of computer development and took it beyond graphics and CAD programs,” Kara said. “Unix was textual based, so the computer evolved around the keyboard. They needed more pointing and clicking than drawing, and the mouse was good for pointing and clicking. Now we’re trying to get back to more natural tools.”

Jon Hirschtick, founder of SolidWorks, hopes to add touch-screens, such as those found on iPads and ATM machines, as an interface for CAD. Engineers might draw on the screen with a pen-based input or might use a haptic device to feel as though they’re grabbing a model to manipulate it.

“The most frequently used commands in the CAD program are moving models around,” Hirschtick said. “So the idea of interacting with the model by grabbing it with your hand is powerful.”

Hirschtick also sees engineers routinely printing in 3-D to study designs, just as publishers today print manuscripts to proof them on paper rather than on the screen. Though the technology has been around for some time, it is becoming more affordable and now has a place in small businesses. “The cost of the equipment, the fidelity of the model—its color and accuracy—all that is changing faster than anything else I know of in the CAD and computer landscape,” Hirschtick said.

Perhaps a greater 3-D change is coming to the way engineers do business. Mark Jakiela, a professor of mechanical design at Washington University, is developing methods that will make it possible for mechanical engineers to work independently, as freelance talent, unchained to a single locale.

“Freelancers could have more and varied opportunities for employment,” said Jakiela, “and the companies they work for would have fewer costs in terms of long-term benefits and office space.”

Under the model envisioned by Jakiela, independent mechanical engineers would band together to work on a project through an Internet site.

Jakiela studied how engineers at large equipment manufacturers work together on product development. To translate that method to the Internet, Jakiela developed a forum type software (commonly found on the Web—in which a poster begins a threaded conversation to which other posters respond) for engineers.

“The real value is in the process,” Jakiela said. “The software itself is not radically new.”