The Engineering Behind a Spectacle

The Engineering Behind a Spectacle 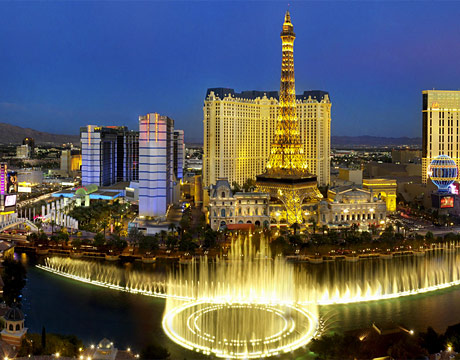 Millions of visitors find their way to the Bellagio Hotel in Las Vegas every year, and the hotel’s signature experience begins before they ever walk in the door. The famous water outside the facility has further heightened the status of the famed hotel but WET Design, which worked on the mechanical engineering of this and other famed water spectacles, hopes the audience will never even consider the engineering behind their work, says Jim Doyle, director of design technology for the company, based in Sun Valley, CA. They just want them to enjoy their shows.

Doyle pulls back the curtain a bit as he describes some of the thinking behind the spectacles that have wowed audiences on multiple continents.

“The Bellagio, for example, was watershed in how incredibly complex it was and we realized it was going to be even bigger than we thought it was,” he says. “This wasn’t the expansion of a little fountain here, it was a major undertaking from the mechanical and electrical standpoint: high-connected load, tremendous devices, not only a power issue with all the compressors and pumps but to have distributor control to and out in the middle. When running, it pulls about five megawatts, intermittently, of course, because it’s a water feature.”

It runs on air because it’s a lot more efficient than electrical for what they want to do. “It can actually collect air pressure between shows and do these staccato movements that last only like three seconds,” he says. “We can use stored energy from the air to do that.”

Among the devices he alludes to are what he calls the “oarsmen.” “If you look at the whole row of them, they look like oarsmen on the ship. They are xyz robots, the x and y being mechanical tracking. X is tracking y like a gimbal, and z is the pump speed. Sounds simple until you put it underwater and deal with it more than 200 times since that’s how many we made.”

Doyle says the roughly 3.5-5 minute show was a great learning curve for the company. “Now we understood even better how to distribute massive amounts of electrical into a water feature,” he says.

The learning made works like the Dubai Fountain easier, but that’s not to say easy. “For example, here we had fan oarsmen. So instead of the stream out of oarsmen, we had a fan and the fan has theta access so it can rotate,” he says. “There’s always something new to learn on a project, but that’s part of the fun of it.”

And, it shouldn’t be surprising that Doyle comes from the world of Hollywood special effects. What he likes here is that work is seen for years and might not just disappear like a movie can if there’s a weekend of poor box office receipts. “It’s great to build something and know how appreciated it will be,” he says. “It can also help business for the area. And hey, I enjoy watching them like everyone else.”

For Further Discussion
It’s great to build something and know how appreciated it will be. It can also help business for the area. And hey, I enjoy watching them like everyone else.Jim Doyle, WET Design