The Cheetah (Bot) of War

The Cheetah (Bot) of War 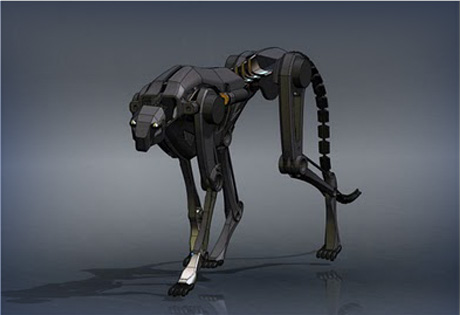 Where possible, humans have avoided sending armed humans after other armed humans to neutralize them—it's just too symmetrical of a situation.

To avoid such confrontations, throughout the history of warfare humans haveused, among other things, dogs in place of soldiers. Against these dogs of war, the human had a chance. On occasion the dog could be outrun. When snapping at throat or lodged on arm, man's best friend could be dispatched by an armed soldier in many ways.

Now the folks at Boston Dynamics, Waltham, MA, have put an end to these fallibilities of the canine. To replace the flawed dog of war, they have created the robot cheetah of war. These new beasts will not be so easy to put down. And they'll be impossible to outrun. Especially now.

Boston Dynamics put its latest Cheetah on a treadmill and saw it hit 18 miles per hour. That set a new record for fastest legged robot, a good five miles per hour faster than the old titleholder, a biped from MIT that hit 13 mph back in 1989.

The DARPA-funded Cheetah is one of many creature-inspired robots the company has developed to make life on the battlefield easier for the foot soldier. There's the building-hopping SandFlea; the wall-climbing, lizard-like RiSE; and RHex, which looks something like a six-legged platypus. The Cheetah's most direct ancestor is BigDog, a four-legged canine-esque machine meant to help infantrymen haul heavy loads.

Hauling loads and hauling butt are two different things. As the goal shifted, so did the design—from pack dog to fast cat. The fastest legged robot and the fastest legged animal that shares the same name also share much of the same design, most notably in the spine. Its elasticity returns much of the energy back into the run. But the Cheetah's primary investigator, Marc Raibert, warns "not to take the similarity between the Cheetah robot we built and the animal too far. We are not trying to copy the animal, just take inspiration from it. It is true that they both have four legs and use their backs to help speed up their running, but the differences are significant too: most of the details are different."

However different their details, both the beast and the bot face the same problem: If you want to go fast, you can't go fast for long. "Energetics is an organizing principle for both the robot and the animal, and for most vehicles," says Raibert. "Generally, the more weight devoted to power generation and fuel, the more difficult it is to support and accelerate the system. If the Cheetah had more lung and heart, perhaps it could run longer, but it would probably have to give up some top speed. The next version of the Cheetah Robot will also have limited duration of operation to save on power weight, cooling weight, etc."

Being overweight is not the only thing keeping the Cheetah from being sent out to attack. The titanium fangs and laser eyes that might make it truly terrifying to the enemy have yet to be installed. At the moment, the beast is missing a head, making the robot arguably more creepy than terrifying. It also requires an "off-board hydraulic pump" for power as well as a "boom-like device" to keep it from veering off its (as of now) rather straightforward course. But these problems are none too difficult to solve and Boston Dynamics hopes to let its sprinter run free in the out-of-doors later this year.

We are not trying to copy the animal, just take inspiration from it.Marc Raibert, Cheetah's primary investigator, Boston Dynamics