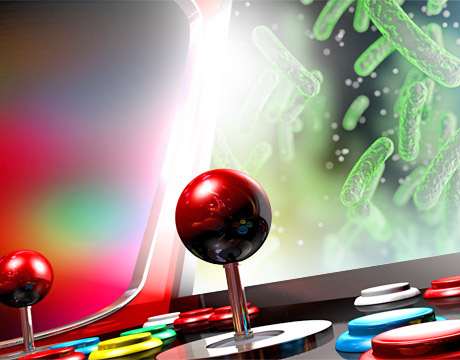 The pleasure of playing video games springs, at least in part, from the feelings of control and power that saturate the player, however temporarily. In the end, though, the Q*berts, the Marios, and the Master ChiefPetty Officer John-117s, are just lights on the screen, code in the machine. Nothing alive, or even tangible, has been driven, jumped, or killed. But now gamers weary of the merely digital can get their power trip on playing a video game where they’re in control of an actual living organism.

Ingmar H. Riedel-Kruse, a professor of bioengineering at Stanford University, wanted to “allow everyday people to experience the microbiologic processes that are normally hidden from us in new ways, enabled by modern technology,” he says. “We all can look through a microscope and see these cells, but you can never really interact with them and touch them.” In a paper published in Plos One in October, he offers a blueprint for a device that allows gamers, hobbyists, and budding scientists to turn microbes to Pac Men.

In short, with a smart phone, a joystick, an off-the-shelf eyepiece, some LEDs, a handful of 3D printed parts, and some Euglena cells, bio-gamers can be directing a microbe through a maze in a matter of hours. The price for these parts is less than a $100—less than $60 if you have access to a 3D printer. The cells (which are both cheap and safe) can be ordered from a school supply company and will last for months unrefrigerated.

Once assembled, the phone shows what’s going on under the DIY microscope. At the start it’s nothing more than Euglena cells swimming willy-nilly. But once players tap the image of one of the Euglena cells, a Pac Man character instantly appears superimposed on top of it, as well as a surrounding maze with edible dots. The Pac Man/Euglena cell unit can then be steered through the maze with the joystick, gobbling dots as it goes, just as the original arcade character did back in the 1980s. The joystick turns the LEDs on and off, attracting (and repulsing) the cells, which are light sensitive.

In another game the cells are athletes on a soccer field who can dribble a soccer ball down the screen and can pass it to other cells or kick for a goal.

However thrilling the joy of cell manipulation, The LudusScope is not meant for fun alone. The hope is that it will educate on three different levels: in constructing the device; in playing the games; and in experimentation. “You have augmented play which basically transitions into more serious scientific inquiry, where you can make measurements,” says Riedel-Kruse. “You see the cells swimming across the screen and you have real time tracking, which tells you how fast the cells are moving.”

To ramp up the educational value of the game system, Riedel-Kruse’s lab has received a seed grant from the NIH to develop a kind of kit with all the necessary elements. If mass-produced, the cost of a LudusScope kit would likely go below $30. At that price point, the LudusScope may become the first videogame kids are allowed to bring to school.

“For me the key tagline is to really make biology accessible,” says Riedel-Kruse, “to not only look through a microscope and see, but to influence what you see.”

You have augmented play which basically transitions into more serious scientific inquiry, where you can make measurements.Prof. Ingmar H. Riedel-Kruse, Stanford University