The Beep Heard 'Round the World

The Beep Heard 'Round the World 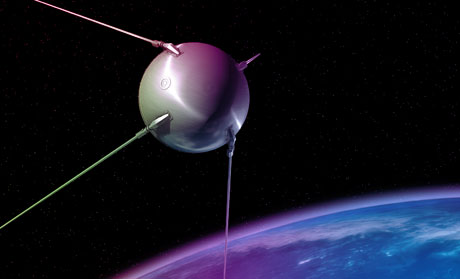 In 1957, there came a sound from the clear October sky that couldn't have been less monumental. It was a simple series of beeps, capable of being heard by anyone with a ham radio set. Yet those beeps and the machine that made them, touched off a chain of events that has transformed the planet.

From a missile range in what is now Kazakhstan, technicians working for the Soviet Union launched Sputnik 1—the world's first artificial satellite—into orbit on October 4, 1957. Every 98 minutes, Sputnik, which looked like a whiskered aluminum beach ball, circled the globe. The “Space Race” had just begun.

Since the end of World War II, the United States and the Soviet Union were locked in a competitive rivalry that, on occasion, flared up into serious armed conflict. However, the terrible destruction that could result if the Cold War turned hot was never far from public consciousness; American schoolchildren were taught to duck under their desks in the event of an atomic bomb attack and space-alien movies drew on the fears of a communist invasion.

Until the late 1950s, both sides relied on fleets of heavy bombers to carry their nuclear weapon payloads. But using captured German designs (and sometimes scientists), U.S. and Soviet militaries were developing missiles capable of delivering deadly weapons quickly and reliably. The same technology could be used to deliver an object into Earth orbit.

An 18-month period in 1957-1958 was designated as the International Geophysical Year, with the intention of spurring worldwide exploration of the earth. In 1955 the Eisenhower administration announced it would attempt to launch a satellite using civilian-developed technology in conjunction with IGY. The Soviets, in typical Cold War fashion, raced to beat the Americans into orbit. Unlike the American effort, the Soviets were going to repurpose a military missile for the job and did their work in top secrecy.

The Soviet satellite was originally planned to be a scientific probe weighing more than a ton and carrying an array of instruments to study outer space. The work proved to be too difficult and the Soviets scaled back to something far simpler. Sputnik 1 was small—183 pounds—and equipped with two radio transmitters and pressure and temperature gauges. The body was filled with nitrogen gas to act as a crude micrometeorite detector—if the shell was punctured, the resulting gas leak would affect temperature and pressure readings.

Sputnik 1 was launched in secret to an altitude of 560 miles, where it completed elliptical orbits every 98 minutes, speeding along at 18,000 miles per hour. Soviet statements announcing this success bragged how the world could see how the new socialist society had turned even the most daring of man's dreams into reality.

Sputnik was an indisputable sensation. Observers with binoculars scanned the dawn skies to spot the satellite. Amateur radio operators listened to Sputnik's signal as it passed overhead. Others feared nuclear warheads could now be put into Earth orbit, tipping the balance of power to the Soviets. For many Americans, however, the launch of Sputnik was more of a humiliation. To coincide with the anniversary of the Soviet Revolution, Sputnik 2, carrying a live dog, was launched less than a month later. Meanwhile, the publicized launch of the American Vanguard was moved up to December 1957. The grapefruit-size payload was sent only a few yards as the rocket exploded on the launch pad. Over the next year seven more American launches failed.

The Soviets held onto their early lead in the Space Race. The Luna 1 probe flew past the moon in early 1959. In 1961, cosmonaut Yuri Gagarin became the first man in space and was promoted in flight from senior lieutenant to major in the Soviet Air Force. It would take a decade for the United States, with its successful Apollo program, to be seen as the clear leader in space technology.

There is no underestimating the influence of Sputnik. It led to Voyager, which has probably traveled farther through space than any other man-made object, as well as the International Space Station, a cooperative project among many countries, including the United States and Russia.

Over fifty years after the launch of Sputnik 1 American and Russian astronauts live and work together in Earth orbit. This idea would have been anathema to both countries a half-century ago, when the world was transfixed—and transformed—by a constant string of beeps from space. What did the beeps mean? They were actually coded messages providing straightforward pressure and temperature data. Who could have believed that simple telemetry would have so much meaning?

There is no underestimating the influence of Sputnik. It led to Voyager, which has probably traveled farther through space than any other man-made object, as well as the International Space Station.