The Beauty of Movement

The Beauty of Movement 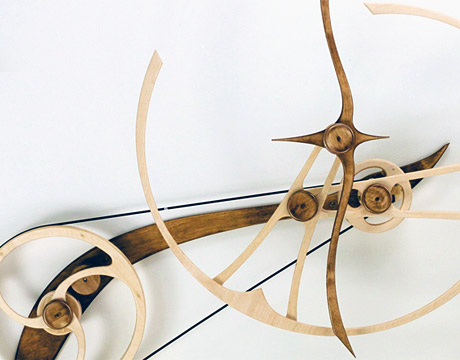 Sure, there’s plenty of art that requires a bit of engineering. Think of the pyramids, large-scale Jeff Koons, and movies. They all depend on someone that understands materials, movement, and energy. But when two the disciplines merely intersect, the engineering plays servant to the art. Rarely do they unite as one.

The work of David C. Roy is that rarity. In his moving, mesmerizing, kaleidoscopic works, the engineering is the art and the mechanisms serve the beauty of mechanisms. For Roy, the problem of how to make something work beautifully, and how to make something beautiful are the same. “They’re all problems to solve,” he says. “There’s a lot of physical engineering, but the aesthetic problems are also fascinating. They use the same part of my brain.”

That brain once seemed destined for traditional engineering or the sciences. Roy’s father was an engineer who worked on early jet engines, and David followed in his footsteps, earning an engineering scholarship to Boston University. He switched to chemistry for a while and eventually received a degree in physics. But during his college years he was exposed to the world of art thanks to an evolving relationship with an art student—who would become his wife. (The father-in-law was a mechanical engineer too). After a very brief stint as a programmer, Roy began to devote himself to wooden toys and things that moved. “It was solving problems, and there were a whole lot of problems. I didn’t know anything,” he says.

Building toys taught him woodworking and some mechanical basics. In his mind, though, he wanted to build dynamic pieces that didn’t rely on air currents—a la Calder—or require “the hassle of having a chord dangle down from the sculptures.”

“I just wanted to make things move,” he says. “I reinvented the escapement. As I got control, it was: ‘How do I do this and make it interesting, how do I make interesting patterns and create different motions with a controlled release of energy?’” Roy didn’t borrow much from clock innards to improve his escapement design because in his works the mechanism served a different ultimate purpose.“In a clock you want very predictable, short periods of time. I wanted to create random, or unpredictable motion.”

Roy named his first sculpture Albert. It stood six feet tall, ran for 20 minutes, and sold for 125 dollars. The last figure was, perhaps, the most important. It meant that Roy could conceivably pursue his vision of kinetic wood full time.

As his aesthetics grew more sophisticated, so did his engineering skills, always with the twin goals of creating the longest possible run times and the most pleasing patterns. After mastering the escapement, bearings brought the next big leap to Roy’s sculptures. “It was a huge change in what I could do—much more motion, much smoother, longer running times.” But their use required new knowledge. They had to be seated, confined in a wooden space, and Roy had to throw himself into bearing research to determine which kind best suited his needs.

The addition of constant force springs further lengthened run times and freed Roy from a dependency on pulleys and weights. They also changed the focus of his work from the beauty of the mechanism to the beauty of movement.

But other tools along the way have been just as important, from a production viewpoint. “The electric screwdriver was a godsend when it came out,” says Roy. So was the computer. Where Roy had once done it all by hand, from drawing board to saw to sandpaper, he now relies on Bezier curves, Strata Design 3D, and a CNC machine. And run times for his ever-more stunning sculptures fall between 20 and 40 hours.

Roy’s sculptures have supported him for 40 years now and put his kids through college. And they don’t stay in the shop long. But he never considered hiring anyone to increase production. “I like doing a whole lot of things and I like not having to boss other people around,” he says. “What fascinates me is taking problems and solving them on my own.” Those days-long run times come thanks to the precision and experience Roy’s had with every part of every sculpture he’s ever made. “When I am doing a drawing I have a sense of what the limits are, how far I can push it—that’s been acquired over the years, because I’ve been burned by trying to push it too far this way or that way. The failures that feed into your general knowledge are a hard thing to pass on.”

Failures, though, are a little less common for Roy than they once were. But the motivation behind each work has been a constant: “It needs to work, need to work well, but it needs to look good and be interesting, bring a smile, or make someone wonder why it’s happening . . . or just sit and watch it the way you watch a fire.”

For Further Discussion
In a clock you want very predictable short periods of time. I wanted to create random, or unpredictable motion.David C. Roy, Artist