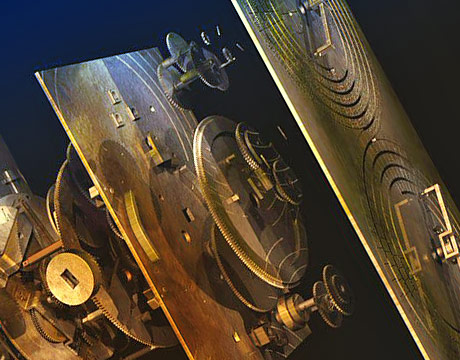 “If I could verify its existence, it would be like discovering a 747, made a thousand years before the Wright Brothers ever flew.” Brenda Wyatt, Highlander

These words, spoken by one of the characters in a 1980s cult movie classic, were meant to be part of a fictitious and fantastical plot line in which immortal beings wielded magic and sorcery, with time travel leading to anachronistic objects appearing long before and after the time periods in which they originally existed. All part of an entertaining two hours in a movie theater, of course. However, in the year 1902, some people believe divers exploring an ancient wreck off the coast of the Greek Island of Antikythera found exactly what was described above: the equivalent of a 747 in the middle ages.

It was called “The Antikythera Mechanism” by scientists, and so baffling was its presence on a second century BC shipwreck that they immediately decided it was impossible, and dismissed the device as a more modern object from a more modern wreck that had somehow become mixed in with the contents of an older wreck by chance.

In the years to come, they would learn they were wrong, and that what had actually been discovered was in essence the world’s first computer, designed and built over 2,000 years before Macs and PCs began sitting on desktops in offices and living rooms around the world.

And at a time when historians believed that, other than the Archimedes Screw itself, gears were not remotely a part of everyday life, its mechanical functions are nothing short of jawdropping.

“It’s a gear train in effect, a very complex gear train,” says Dr. Brendan Foley of the Woods Hole Oceanographic Institution, Woods Hole, MA, and a member of past dive teams that have studied the wreck site directly. “On one face, there are two interlocking spirals and as you turn one main drive handle, it sets this whole thing in motion. If you turn it clockwise, it moves you forward in time. If you turn it counterclockwise, you move back in time.”

The position of the known celestial bodies at the time, along with certain astronomical events, would thus have been revealed for whichever date you chose on the mechanism.

“As you turn that drive handle, on the two faces, indicator needles show the possibilities of lunar and solar eclipses on these two interlocking spirals on the back side. And on the front side, there are five indicator needles that are showing the positions of the five known planets.” There are even gear arrangements to account for the retrograde motion of the Earth in relation to other planets, meaning some of the indicator needles will move in the opposite direction of others.

So has all of written history been incorrect? Were ancient Greeks and Romans actually equipped with desktop astronomical computers in their living rooms millennia before they would be seen on earth again? Not exactly. And that is where the story of the Antikythera Mechanism goes from being that of a mystical device of celestial or alien origin to being something that, to some, is even more interesting: that of the rarest of historic relics, one that can tell us volumes about the daily lives of those who lived centuries before us.

It turns out that this wondrous, anachronistic technical marvel may in fact have been a luxury item of the wealthy, meant to entertain parlour guests. “It turns out that the ancient Greeks did have the technical capabilities to produce these really complex, sophisticated devices,” says Foley. “Now they weren’t really scientific instruments as we would think of it, but more like curios that a wealthy patron might commission to show off to his friends.”

Predicting eclipses and the positions of heavenly bodies may not sound like something that would impress a dinner guest in 2016, as most people could find this information in seconds by clicking an app on their iPhone. But in the ancient world, where astrology held great spiritual sway, and the locations of the planets and stars were a mystery to most of the world, this would have been a thrilling and momentous device to say the least, says Foley.

“Why move forward and backward in time? Well, when your friend comes over, you might want to dial up his birthday, and tell him where the planets and stars were aligned on that day, and sort of use it for fortune telling.”

In a world of godlike oracles whose predictions of the future were often taken as biblical truth, a device such as the Antikythera Mechanism would have brought its owner great prestige.

However, the circumstances surrounding the wreck in which the device was discovered ironically have given birth to the hope that more gear-based curios could potentially be discovered in the future, not only rewriting the mechanical and technological history of the ancient world, but making the device itself far less magical in nature. Research on the wreck has revealed that it is in fact a maritime rarity: a massive Roman grain carrier, known to exist by experts but rarely found in modern archaeological history, to the point where Foley calls it “one of the holy grails for underwater archaeology.”

Carrying the grain that fed an empire, and specifically a city of over one million inhabitants, one can imagine how large such a ship would have been: 1,000 tons of weight, with 50-meter-long beams and 15-inch-wide planks begin to give an idea of the awe-inspiring scale of such a vessel. But this leads to another important question: What was a device like the Antikythera Mechanism doing on this type of vessel? The evidence has led experts to come up with a theory that opens up many possibilities, and that has these gargantuan, functional grain ships doubling as luxury liners for the wealthy.

“This is the beginning of the first tourism industry, in a way,” Foley laughs. “So wealthy Romans or whomever would jump on the grain ship as it sailed out to Alexandria, and then they would go and tour The Pyramids … in relative comfort and luxury.”

And with the rich and famous on their vacations would presumably go their comforts and luxury items, up to and including mindbogglingly advanced analog computers, and possibly other small, geared mechanisms and figurines called “automata,” that were known to have existed in the ancient world. Exceedingly rare, the hope is that examples of these figurines and other advanced devices could be lying on the ocean floor waiting to be discovered, the lost tech toys of the ancient super-rich.

Who knows, one of them might even resemble a 747.

For Further Discussion
It turns out that the ancient Greeks did have the technical capabilities to produce these really complex, sophisticated devices.Dr. Brendan Foley, Woods Hole Oceanographic Institution