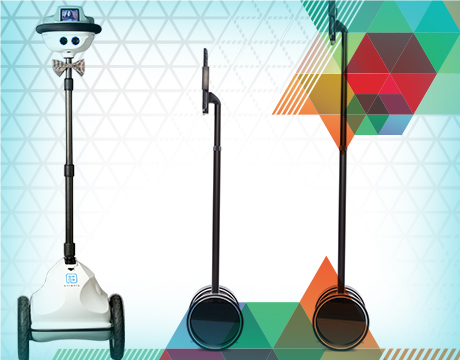 You are a chief engineer at a medical device manufacturing company that has locations in California, Germany, and China. A new device that’s being manufactured in China has a problem–mechanical and software–and while you are in California, your software engineer is located in Germany. Imagine if both experts could move around the Chinese facility, examine the device closely, and resolve the issue remotely without having to hop on a plane? Telepresence robots can make that happen.

Enabling people to connect remotely and participate in any working environment without being physically present, telepresence robotics is gradually gaining ground in the manufacturing, healthcare, education, and corporate sectors. Telepresence robots, which primarily function on the Internet, are being used for a variety of applications such as attending meetings when working from home, managing distance education, conducting patient rounds in hospitals, and also touring manufacturing facilities.

“If every important conversation that happened in the office happened in a meeting, we would be fine. Most often important conversation happens outside the meeting, sometimes after it, by the water fountain,” says Marc DeVidts, president and co-founder of California-based Double Robotics, a Y Combinator backed company that has created an iPad-based robotic telepresence platform. “Double is basically a two-wheeled balancing robot that works on the iPad and allows you to move around and join people in any location. It puts you in control of the conversation rather than relying on somebody else,” adds DeVidts.

Weighing only 15 pounds, Double is a set of motorized wheels with an extensible iPad stand. A user attaches one iPad to the Double and uses another one to control the robot in a remote location. “Setting up Double is as easy as downloading an app on your iPad. You can stay at eye level by adjusting your height remotely, which makes conversations fluid and real,” says DeVidts.

Double’s customers so far have been businesses–small to corporate–and they are using it for different purposes, says DeVidts, such as real estate agents using it in homes and remote workers of an office with multiple locations who want to be more connected.

“Robotic telepresence provides value if you need to move around and determine when you go, when you arrive. If you just want to do a call with a bunch of people in a conference room, there are Polycom, Skpye, and other tools,” says Tim Lenihan, director of business strategy at Anybots, Santa Clara, CA, a company that has been building web-based communication systems for over a decade now. “We look for applications that have a strong value and where you clearly cannot use fixed video conferencing,” he adds.

Anybots’ QB Avatar takes up only as much space as a person and weighs 32 pounds. The height is adjustable, from 2 feet, 8 inches to 6 feet, 2 inches, so remote users can interact with those sitting down or standing up. It can also work in multiple professional environments with multiple audiences.

Engineers at Anybots are trying to make their robots more nimble and safer. “We are really good at balance for safety and low latency video stream. In the recent months, we have been working with Cisco to use their video conferencing and integrating with our drive platform,” says Lenihan.

“Everyone is trying to reach a different market,” says DeVids, adding that “our aim is to make a lighter, cheaper, easier to use version of a robot. To remove the robotic element and make it more like facetime on wheels.”

The average cost of telepresence robots ranges from $15,000 for high-end devices to about $1,000 for low-end consumer-focus robots. Anybots’ QB Avatar is priced approximately $10,000 and the iPad-controlled Double costs around $2,000. Even though many other companies such as iRobot, Vgo, MantaroBot, RoboDynamics, Bossa Nova Robotics, and Suitable Technology are developing telepresence robots and prices are dropping, the technology is still expensive. However, industry experts believe as this technology becomes ubiquitous, the prices are expected to decrease.

Earlier this year, the FDA approved iRobot RP-VITA telepresence robot for use in hospitals to monitor patients. “When you look at the future, you see different technologies–mobile, cloud, robotics, telepresence–converging and having application in multiple fields,” says Lenihan.

“It is really interesting to see what we can do by just being able to drive around and interact with people, how much precision control we can have over a robot remotely, and that kind of thing wouldn’t be possible years ago,” says DeVidts.