Technology Takes Tattoos into the Future

Technology Takes Tattoos into the Future 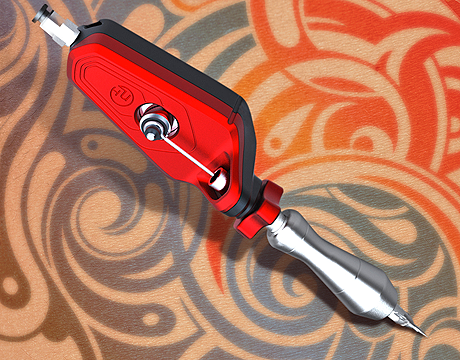 Ink is the new black. The U.S. Food and Drug Administration estimates that 45 million Americans are tattooed, and a poll from Harris finds marked men are now outnumbered by marked women.

What happened to the taboos around tattoos? Engineering. New technologies are expanding the artistic limits of tattooing while minimizing the discomforts, health risks, and permanence of extreme body art.

According to analysts at IBIS research, at least 8,000 tattoo parlors now serve a $3.4-billion annual U.S. demand. Even with more mainstream acceptance, tattoos retain their streetwise mystique, especially among the 40-and-under set who sport the lion’s share of the nation’s tattoos.

Ancient indigenous native cultures around the globe practiced tattooing, body painting, piercing, and scarification to express important spiritual or social messages. The global spread of European economic and religious influence led to the custom’s demise in many cultures, yet also introduced it to new generations of world travelers. In the early twentieth century, ethnologists like Wilfred Dyson Hambly documented some of the last vestiges of the original practice in isolated populations, capturing intricate body markings that still inspire artists today.

In recent Western history, tattoos have evoked the low-brow vibe of the world’s seaports, sideshows, cell blocks, and skid rows. Along with the social stigma, the practice has drawn unwanted scrutiny from public health officials. New York City even banned tattoo parlors outright in 1961, blaming them for an outbreak of hepatitis B. In the city of its U.S. rebirth, tattooing was performed illicitly in Bowery bucket shops for the next 36 years.

Paleolithic tattoo artists decorated their clients using sharp sticks and red hot coals. Thousands of years later, the tools may be fancier but still perform the same bloody, wound-inflicting act. Whether by hand or with a machine, the artist uses needles to recreate a design below the surface of the skin. Tracing along a pre-drawn template, the artist pokes thousands of tiny, 1-mm-deep perforations in the skin. Ink flows in droplets through the perforations, leaving an indelible mark on the dermis. Before the first electric tattoo machines appeared in the 1890s, it was a painstaking manual process that could take days.

The big breakthrough in tattoo technology came in 1875 with Thomas Edison’s electric pen and autographic press – the first electric office duplicating system. Before widespread use of typewriters, the pen was used to engrave letters and drawings on a paper or wax stencil. The pen’s coil-powered stylus worked like a miniature jackhammer, punching small holes in the stencil at rates up to 3,000 per minute in sync with the clerk’s pen strokes. The document reproduction stage remained low-tech, relying on a manual ink roller and flat-bed press to print one duplicate at a time.

Although Edison was said to sport a modest tat of his own, he never intended his machine for such a subterranean use. However, the device’s enormous potential for tattooing was immediately obvious to artists of the day. In 1891, a New York tattoo pioneer, Samuel O'Reilly, scored the first patent on an Edison-inspired electric machine. By the 1920s, the true precursor of today’s basic machine became standard.

Most machines today are electric, operating either with a direct rotary drive or a two-coil electromagnetic motor. Some artists prefer pneumatic machines, which tend to be lighter, quieter, and lower-maintenance than electric models, yet they require a supply of compressed air. One of the newest twists on the old theme is the Neuma Hybrid, from Neuma Tattooing Machines, Granada Hills, CA. For artists on the go who want the performance of a pneumatic machine but don’t want to haul an air compressor around, the Hybrid creates choices. It’s engineered primarily as the next generation of the company’s widely used N2 pneumatic machine, but with the addition of an electric module it can adapt to a standard 18-V power supply and RCA cables.

Most of tattooing’s technological history has been spent making the job easier for human artists. But be careful for what you wish. A team of French design students adapted a 3D printer that could make tattoo artists totally unecessary.

As part of a competition sponsored by the French cultural ministry, the team of three ENSCI les Ateliers design students took a MakerBot printer, replaced its resin extruder with a makeshift tattoo needle, and programmed it to engrave a perfect permanent circle on a team member’s forearm.

Their first step was to practice on artificial skin with a tattoo machine borrowed from a local parlor. They programmed the printer software to create a perfect circle – something that human operators find extremely difficult to do by hand. After adapting the printer nozzle to move a standard pen, they then worked out a way to hold the subject’s skin taut with a section of tubing. With the practice run complete, the teamwent to work outfitting the printer to steer a real tattoo gun with equal precision. After modification to eliminate machine vibration, the students pushed “print.”

On the industrial innovation front, engineers are foregoing ink altogether in favor of more advanced media for skin-borne messaging. Implantable biosensors that transmit updated medical data through the skin using LED lights have potential in diabetes management. Motorola Mobility, part of Google, has recently patented an electronic neck tattoo that functions as a smartphone microphone, voice processing device, or – according to the patent application – a lie detector.

These new chapters in the history of tattooing may be written in disappearing ink, or they may leave an indelible impression. Either way, they reveal how deeply the art and science of tattooing has gotten under our skin.

For Further Discussion
Most of tattooing’s technological history has been spent making the job easier for human artists. But be careful what you wish for.