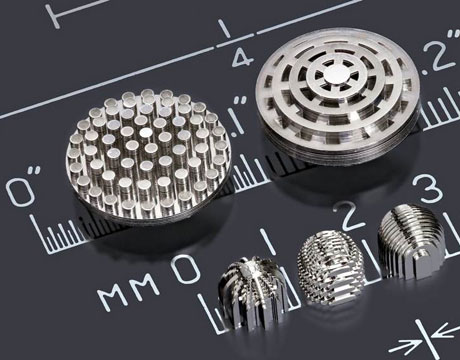 It’s pretty late in the game to not be on the additive-manufacturing (AM) bandwagon. AM technologies have taken the manufacturing world by storm over the last decade. Although there are multiple methods, 3D printing is one of the most popular, especially in the field of bioengineering.

Unlike traditional manufacturing methods, which carve a product out of a block of material or mold it out of a molten resin, additive manufacturing builds a solid, 3-D part, layer upon layer. A CAD model guides the distribution of a layer of powdered material, which is then fused together using a laser. Another layer is deposited on top of the first layer and fused, and the process is repeated until the exact, final part has been built. Although plastics can sometimes be used, most AD applications require metals for higher strength or hardness. However, as these parts continue to become smaller and more complex, it is harder for standard AM technologies to keep up with the more challenging shapes and tight tolerances. Therefore manufacturers are eager to find additive manufacturing processes that can make high-precision parts at the millimeter scale, with tight tolerances.

Microfabrica, a Van Nuys, California-based advanced manufacturing firm, has developed a proprietary, micro-scale AM process that does just that. Called MICA Freeform, it can mass-produce millimeter-scale metal parts with micron-size features. The process is also capable of combining different metals into micro-composite structures that outperform single metals or alloys. This technology is used to fabricate millions of parts each year, mostly for the aerospace, medical device, and semiconductor industries. It can also go beyond parts to fabricate functional, complex, mechanical devices at the same scale that have multiple moving parts, with no assembly required.

Unlike 3D printing methods, MICA Freeform can achieve high-volume production with extreme precision, using engineering-grade metals including nickel/cobalt, palladium, rhodium, and copper. This process can produce features as small as 20 microns with a tolerance of +/- 2 um.

These increased capabilities create more design options for engineers. For example, MICA Freeform can fabricate holes of any shape into a part—the circularity of round holes, blind holes, and counterbores can be maintained at sizes as small as 40 microns (0.0016") in diameter. The concentricity of inner and outer diameter features can be held to tolerances of ±2 microns (0.00008”). The minimum width of channels (open or hidden) is 30 micron (0.0012”). Because it can also simultaneously fabricate all the moving parts of a mechanism in their assembled state, the technology eliminates micro-assembly costs and reduces yield loss. Common “moving parts” products that can be manufactured in one piece include hinges, journal bearings, and linear bearings.

“We have been surprised and impressed with the wide variety of complex devices and mechanisms that our customers have designed,” says Richard Chen, vice president of design engineering for Microfabrica. “Some of the mechanisms have 7 to 9 moving parts that are fabricated at the same time.”

One of the biggest differences between MICA Freeform and other AD technologies, such as selective laser melting, is that the MICA Freeform process creates dense, precise parts that don’t require any infiltration or other finishing processes. This results in a final product with better mechanical properties, at less cost.

“For many high-tech industries, the drive to miniaturization is immutable,” says Chen. “As conventional manufacturing methods fail to keep pace, additive manufacturing is evolving as the disruptive solution. We are uniquely positioned at the forefront of these converging trends to support customers in the medical device, semiconductor, and aerospace industries.”

For Further Discussion
The process can simultaneously fabricate all the moving parts of a mechanism in their assembled state, eliminating micro-assembly costs and reducing yield loss.Richard Chen, VP, design engineering, Microfabrica