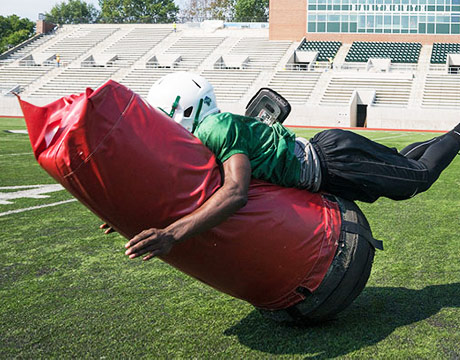 They aim their shining helmet downward, put a dirt-caked chin strap into place, teeth sinking into form-fitting mouthguard. They line up, focused, all energy on their target. A piercing whistle blows and their cleats launch from the turf, pieces of field flying everywhere.

Breathless pursuit, movements rapid-fire, then finally, expertly, the target is hit with perfect form andcrashes tothe waiting ground. After a moment and with mission completed, the tackler reaches down to grabthe opponent's hand and helphim up.

MVP, which stands for Mobile Virtual Player,had its beginnings atDartmouth College. John Currier, a research engineer at the college’s school of engineering and part of the creation’s team, explains that it actually started with a football coach.

“A friend of mine and college classmate, Buddy Teevens, is the coach of the Dartmouth football team,” he says. “We talked about a way to help the game. He actually has no tackling in practice and it helps to limit injuries. But here was a way to still get in tackling with a moving robot. He ultimately became the sponsor of a capstone project to develop this.”

The bigger aspects of design focused on mobility, speed, agility, and motion. “There’s acceleration and deceleration to think about. There are many interesting movements in the game,” Currier says. “The electromechanical device is remotely controlled and is self-righting so you can tackle it to the ground and it can recover itself. It can get back up, keep on ticking, and get on to the next drill.”

The 40-yard dash from the latest prototype robot was measured as fast as a 4.7 seconds. “Not the NFL’s fastest receiver but a pretty good lineman” says Courier. “It’s also generally foam-padded.”

Used one to two days a week in practice, Dartmouth’s team may have even already benefitted from it by becoming co-champions of the Ivy League this season. “The players seem to like it, and they certainly weigh in on how close it feels to a regular player,” he says. “It works well on regular grass turf. That’s important because teams don’t often practice on the best artificial turf. You can tackle this device with or without pads. In fact, rugby players have tackled it and it does apply well to rugby.”

The MVP has already received a fair amount of attention, even appearing on Stephen Colbert’s show. “When he squeezed it, he called it ‘huggably plush,’” Currier recalls. “You won’t hear too many football players talked about that way.”

Still, all fun aside, the goal is that this will one day help numerous athletes and reduce injury. Currier even says a future goal for the robot could include having an identifiable tackle target zone to allow the machine to alert the tackler to better techniques for safety.

“It’s a tough game and we want to preserve and improve how it’s taught,” he says. “There’s definitely room for innovation.”

For Further Discussion
It’s a tough game and we want to preserve and improve how it’s taught. There’s definitely room for innovation.John Currier, Dartmouth College