Symbol of the Millennium: The Falkirk Wheel

Symbol of the Millennium: The Falkirk Wheel 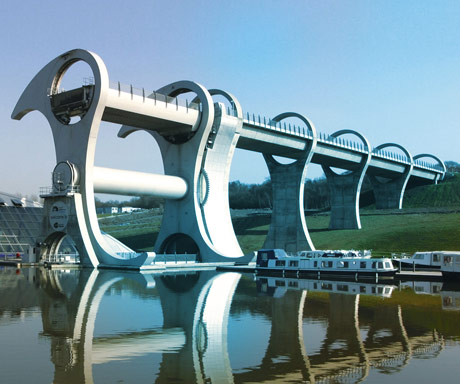 As the Falkirk Wheel approaches its10th anniversary, its owners couldn't be more delighted in how the one-of-a-kind boat lift has transformed Scotland's once-forgotten and neglected canal system into a thriving recreational and tourist attraction. The 35-m-high, 1,500-tonne structure, internationally recognized as an engineering marvel, reconnects the Forth & Clyde Canal and the Union Canal, a vertical drop of 18 m, and provides water transport between Edinburgh and Glasgow.

Conceived in the 1990s as part of the United Kingdom's Millennium Project, its owners, British Waterways Scotland, were seeking a novel, landmark design to take an Industrial Revolution-era project into the new century. The two canals had been connected through a series of 11 locks that were taken out of service in the 1930s when overland transport by road and rail supplanted the canal system. The canals were closed altogether in the 1960s. The Falkirk Wheel, a rotating lift operating through what BWS Business Development Manager Richard Millar calls a "simple and elegant design," move two gondolas on opposite arms from one level to the other. Each gondola, or caisson, contains at least 250,000L of water and can carry up to eight boats at a time.

To reach the wheel, boats moving through the Union Canal must still negotiate two locks, sail through a tunnel excavated beneath the Roman-era Antonine Wall, and proceed through a stretch of reinforced-concrete aqueduct . All are part of the overall £78-million Millennium Project. Still, there is a height difference of 11 ft between the wheel and the main channel of the Union Canal; the aqueduct could not be positioned higher because of its location to the Antonine Wall, which marks the northernmost boundary of Rome's empire in Brittania. The lift then lowers one gondola to a loading basin and entry to the Forth & Clyde Canal, and raises the other to the aqueduct and the Union Canal.

The wheel actually consists of two sets of opposing arms designed to resemble a double-headed Celtic axe. Designed by architect RMJM, they extend 15 m from the 3.5-m-diameter central axle and are placed 25 m apart. Each is fitted between the arms with a diametrically opposed water-filled caisson, or gondola, mounted on bearings riding on a circular rail. When one caisson is lowered, its opposite rises (see video of the Falkirk Wheel).

The weight in each of the gondolas remains the same, no matter how many boats are being lifted or lowered. The mechanics follow the Archimedes principle of displacement: the mass of the vessels moving into the gondola will displace an exactly proportional volume of water. This keeps the wheel balanced, allowing both gondolas to rotate 180 degrees in just five and one-half minutes. The efficiency of the design allows it rotate using very little power, just 22.5 kW to power the electric motors.

MG Bennett & Associates, Rotherham, UK, known now as Bennett Atkins and a part of Atkins Global, designed the mechanical and electrical systems for the project, working with structural engineer Tony Gee and Partners under a contract with Butterley Engineering. Butterley was awarded the contract to design and construct the wheel from Bachy/Solentanche and Morrison Construction Joint Venture, which won the overall contract to design and build the new canal section, tunnel, and aqueduct as well as the wheel and receiving basin.

The existing design was refined from one that envisioned four gondolas with an interlocking gear system. "The interesting thing about the Falkirk Wheel is it is an integration of different areas of engineering," says Nicholas Cooper, who led the work for Bennett and now is engineering director for Atkins' energy business. "It is a machine held together by a structure."

To make it work, Bennett drew on its experience in tunneling and undersea engineering to design a drive system based on those of tunnel-boring machines as well as air-lock doors to provide seals at each end of the gondolas and the canal gates.

Hydraulic rams are used to open and close the gates, release the seals and stabilize the gondolas. As the gondolas contain no power units, Bennett drew on its subsea pipeline experience to design a hydraulic connection to the ram using a "hot stab," an external link that extends from the structure into a port in the gondola where it connects the hydraulic circuit.

Finally, to ensure the gondolas remain stable and in the horizontal plane during rotation, the designers used a series of synchronous gears cut with a shallow involute angle commonly found in old clocks. The concept allows the gears to accept structural deflection as the gondolas move.

And they move enough to handle 130,000 to 150,000 people traveling the canals annually, says Millar. The wheel takes 15 minutes to move boats from one level to the next, compared to the half-day traverse of the old 11-step lock system.

A recent inspection showed the structure is aging gracefully as it enters its second decade of operation. With its 125-year design life and robust popularity, the Falkirk Wheel is fulfilling its owner's desire.

The interesting thing about the Falkirk Wheel is it is an integration of different areas of engineering. It is a machine held together by a structure.Nicholas Cooper, engineering director, Energy, Atkins Global