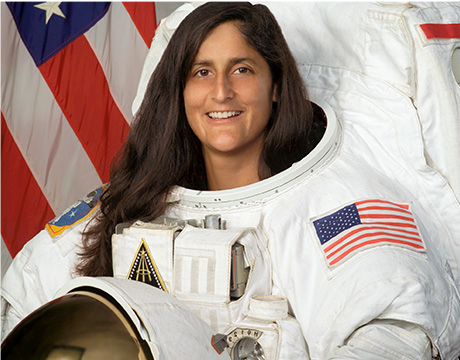 During her time in orbit, she did seven spacewalks, several science experiments, extensive robotic work, completed a marathon and triathlon, and even blogged and tweeted from space—all of this while making big decisions manning the International Space Station as commander of Expedition 33. Sunita Williams: astronaut, engineer, pilot, runner, swimmer, pet-lover, and a woman who is a role model for anyone interested in space exploration.

When the 47-year-old Indian-American astronaut took charge as commander of Expedition 33 onboard a Russian Soyuz spacecraft on July 15, 2012, she became the second woman in history to do so. As a female astronaut, she holds the record for the longest space time (322 days) on two space missions. With seven spacewalks (50 hours 40 minutes), she also holds the record for total cumulative spacewalk time by a female astronaut.

So how does Williams feel making space history? "Records are there for breaking," she says. "It's just another way to let people know how far we have advanced. I am hoping the next generation of space explorers will just get out there and break them."

Wind Beneath Her Wings

Growing up in Needham, MA, Williams aspired to be a veterinarian until her brother influenced her to join the U.S. Naval Academy, where she completed her Bachelor of Science in physical science in 1987. It wasn't until her mid-20s when Williams became a helicopter pilot and heard John Young talking about learning to fly a helicopter to land the lunar lander, that she was inspired to be an astronaut. "I just fell in love with flying helicopters," reminisces Williams. "When I started training on the Soyuz, it was like I can make this Soyuz do anything I want it to do just like the helicopter. You sort of gain confidence at some point in your life and it allows you to try."

In 1993, Williams graduated from the U.S. Naval Test Pilot School and in 1995 she completed her master's degree in engineering management from Florida Institute of Technology. She was selected for the astronaut program by NASA in 1998. Williams thanks her parents for instilling in her a "can do" attitude. She acknowledges the key role her Indian father, a neuroscientist, and her Slovenian mother, an X-ray technician, played in kindling her interest in science. They also encouraged her to always have an open mind. "'The sky is not the limit and you can do whatever you want to do and be what you can be,' they said. Hats off to them for being that way as all three of us: my brother, sister, and myself, have taken advantage of life and gone out there and done it, climbed mountains, and run marathons, and done whatever we want.'"

It's not that she hasn't tasted failure. "A lot of times in my life I have failed courses in college, been number two on a swim team in a swimming event," says Williams. "Those are the deciding moments when either you have a little determination or you quit. I think having some determination and making yourself better when you don't do well is another characteristic my folks have instilled in me. Those are some of the things that make me."

Fueled by her strong determination and undeterred spirit, Williams completed NASA's two-and-a-half year long astronaut training, which included intensive instruction in spacecraft and ISS systems, physiological and T-38 flight training, extravehicular activities (EVAs), robotic operations, as well as preparing for emergencies. "There are a lot of things that need to go right and there are a lot of things that can go wrong, so we spend a lot of time learning how to deal with those emergencies," she says. "And then of course, the modules themselves—the European module Columbus, the Japanese module Gem, the U.S laboratory, the Canadian arm, and the Russian side of the space station. We need to know how to operate all those."

With seven more interior modules, the space station is much bigger since Williams went there last. "Six people on the crew instead of three has its pluses and minus. There are more people to interact with but it's harder to get everybody together for dinner at night." Yes, the crew did find time every other week to share their favorite foods and have a "party" in space. "You eat with a spoon and you never really need a fork or knife. And you don't want to be the one who lost their spoon," says Williams, who lost her spoon one day and found it floating a module-and-a-half away, where the suction caught it. "You never take your spoon for granted ever again!"

The crew spent the majority of the time doing science experiments and EVAs but they also clicked a lot of pictures. "The Cupola is such a wonderful place. Even when you don't want to take pictures anymore, you want to hang out and look out of the window. Your eyes open to more and more things when you are up there longer. You see not only the artistic ways in which the Earth looks but also how it is changing. It feels like it's not just the people there but the Earth is alive itself," she adds.

Now that Williams is back on Earth after four months in space, she is taking out time to do things she enjoys. "You have to make sure you don't get swallowed up in one thing," she says. "Being balanced is very important."

She agrees, however, that balancing a demanding science career and family is challenging for women. "You can do both. It's hard but it can be done," says Williams. "I am married but I don't have kids. I have two dogs and my family and friends help me out with them. They are not kids but they are something you have to be responsible for. If you are going to pursue this career, you need to have a good infrastructure to help you out with things."

With her head in the stars and feet on the ground, Williams is an inspiration to all women in science. Her advice to women considering a career in space is, "Don't put limits on yourself and don't let anyone put limits on you. Find the thing you like to do because when you like something you do it well." Prospects for women in space are huge, she adds. "We have done equally as much as the guys have done. I think in the short amount of time that women have been flying, we are contributors, counterparts, and partners to the men who are doing all this sort of stuff."

For space exploration in the future, Williams believes it's just a matter of time before humans get to Mars. "We think robots can pave the way for us but we have to take the other steps in the meantime. That's why we have the international space station to test out some of that stuff. It's an engineering project. Everything in engineering is done stepwise and we find out where the pros and cons of each step are and we capitalize on that."

Challenging convention and pushing the frontiers of science, Williams has achieved a feat that not many women, or men, have and when you ask her if she would have done anything differently she says, "I just wish I was 20 years younger and get to do it again."