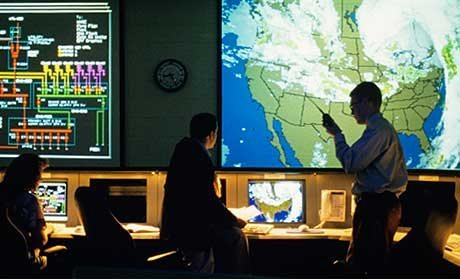 It’s nice to know when it’s going to rain. But it would even nicer to predict earthquakes, fires, and hurricanes. Forecasting such disasters, though, proves more difficult. A disaster is a dynamical system that can, in principle, though not always in practice, be modeled.

Certain types of disasters are, predictably, more predicable than others. Earthquake prediction, for instance, is far from satisfactory, but is seriously attempted nevertheless. The accuracy of predicting volcanic eruptions lies somewhere between those of earthquakes and severe weather—depending on the volcano. Scientists are able to forecast the eruptions of Italy’s Mount Etna using seismic tomography. The method yields time photographs of the three-dimensional movement of rocks to detect their internal changes. The success of the technique is in no small part due to the fact that Etna, Europe’s biggest volcano, is equipped with a high-quality monitoring system and seismic network, tools not readily available for most other volcanoes.

For disasters that involve fluid transport phenomena, such as severe weather, fire, or the release of a toxic substance, the governing equations can be formulated subject to some assumptions—the fewer, the better. Modeling is usually done in the form of nonlinear partial differential equations with the appropriate number of initial and boundary conditions. But those field equations are typically impossible to solve analytically, particularly if the fluid flow is turbulent, which unfortunately is the norm for the high Reynolds number flows encountered in the atmosphere and oceans.

Initial and boundary conditions are required for both analytical and numerical solutions. Computers have their practical limits, so numerical integration of the instantaneous equations (direct numerical simulations) for high Reynolds number natural flows is prohibitively expensive, if not outright impossible.

Modeling to the Rescue

Modeling comes to the rescue, but at a price. Large-eddy simulations, spectral methods, probability density function models, and the more classical Reynolds-stress models are examples of closure schemes that are not as computationally intensive as direct numerical simulations. But they are not as reliable either. This type of second-tier modeling is phenomenological in nature and does not stem from first principles. The more heuristic the modeling is, the less accurate the expected results.

Together with massive ground, sea, and sky data to provide at least in part the initial and boundary conditions, the models are entered into supercomputers that come out with a forecast. It may be a prediction of a severe thunderstorm that is yet to form, the future path and strength of an existing hurricane, or the impending concentration of a toxic gas that was released in a faraway location some time in the past. For other types of disasters such as earthquakes, the precise laws are not even known, mostly because proper constitutive relations are lacking. Additionally, deep underground data are difficult to gather.

The important issue is to precisely state the assumptions needed to write the evolution equations, which are basically statements of the conservation of mass, momentum, and energy, in a certain form. The resulting equations and their eventual analytical or numerical solutions are valid only under those assumptions. This seemingly straightforward fact is often overlooked and wrong answers readily result when the situation we are trying to model is different from the one assumed.

The prediction of weather-related disasters has had spectacular successes within the last few decades. The painstaking advances made in fluid mechanics in general and turbulence research in particular, together with the exponential growth of computer memory and speed, contributed immeasurably to those successes. Imagine what we might do for the world if we could engineer systems as accurate as that to predict earthquakes, hurricanes or wildfires.

The prediction of weather-related disasters has had spectacular successes within the last few decades.