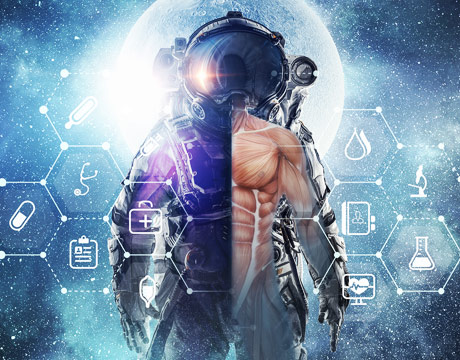 Study Targets the Effects of Space Travel on Muscles

When you think about all the problems which can occur in space travel, muscle atrophy may not be the first one that comes to mind. But the physical effects to astronauts can be tough to deal with.

According to NASA, astronauts can lose up to 20 percent of their muscle mass on space flights lasting between five and 11 days. The lack of gravity means muscles normally used for everything from posture to walking to lifting aren’t being used.

That atrophy may impair an astronaut’s ability to perform physically demanding tasks during a mission, or perform an emergency exit after returning to Earth. Astronauts may also suffer from muscle and hamstring pain, and symptoms of plantar fasciitis, after their return from space.

Ohio State University’s study of muscle atrophy in space and its effects may provide relief.

“It’s known that skeletal muscle atrophy happens in astronauts but we focused on understanding why it happens,” says Vinny Funari, who had been a key member of the team and now contributes as a consultant since graduating with his bachelor’s degree in aeronautical and astronautical engineering.

The research team calls the combined camera and computer system they developed, UMAS (Understanding Muscle Atrophy in Space). Artificial muscle cells would be injected with the substance RNAlater, which freezes the gene expression at different points in time, and they measure the forces on the muscle fiber itself. When a flight is over and returns to Earth, he says, researchers could analyze the muscle fibers and how each one might change with respect to time as the substance was injected.

“It’s essentially a frame system that encloses the entire experiment and inside of that there is a well plate and then we have a way to inject the cells with an injection device,” says Funari. “This incorporates this plunger system with a stepper motor which injects the fluid and evacuates the existing fluid. There is also a camera system in there that monitors the muscle cells inside of the well plates in real time and there are forced transducers that will measure the forces of muscle cells they produce while up in microgravity. We have actuators that will tell the plunger or the motor when to start pushing the plunger,” he explains.

Cardiac surgeon Dr. Peter Lee was the primary investigator and combined the love of medicine and aerospace, Funari says.

Software has been a pressing issue in the study and included working with Simulink simulations to analyze the change the muscle fibers will experience. The software uses basic physics with the boundary conditions being the microgravity-type of environments to control the simulation.

To this point they’ve done the conceptual work, Funari says, and the summer will see them doing the fabrication of the prototype.

This is slated to be tested further when Blue Origin — a privately funded aerospace manufacturer and spaceflight services company owned by Amazon founder Jeff Bezos — lets them put muscle tissue onboard a spacecraft that will be in space for four minutes before returning. Funari, now a fluid systems intern there after a stint as a test operations intern, looks forward to the results.

The team was also a part of the HP and Intel Design Challenge, one of eight universities involved. He credits the event as helping to further spur them on and nail down the CAD portion of the work. For Funari, it’s been gratifying to be a part of the project as someone who loves aerospace and was able to get greater experience trying to contribute to it.

“You think about the design of what gets you there but not always what happens to the people who are a part of it,” he says. “If we make it better for astronauts, then they can do their jobs better.”

For Further Discussion
If we make it better for astronauts, then they can do their jobs better.Vinny Funari, graduate student, The Ohio State University