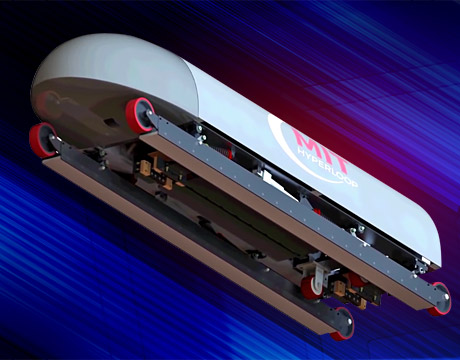 When Elon Musk first proposed the Hyperloop, a tubular transportation system capable of moving people and freight at speeds nearing the speed of sound, the concept was met with interest from intrigued engineers and head scratching by many others. Despite skepticism over feasibility and costs, the futuristic system now is taking its first steps forward. SpaceX, the Musk-owned firm that designs, builds, and launches rockets for space exploration, is building a mile-long test tube at its California headquarters, another private firm is building a scaled-down test track in Nevada, and teams of students from universities across the U.S. and abroad have designed test pods they hope will prove the concept.

A team of graduate students that includes engineers of various disciplines and MBA candidates from Massachusetts Institute of Technology now stands in the front of transportation development, having won an international competition to design the first Hyperloop test pods. The bullet-shaped pod is based on passive magnetic levitation technology capable of speeding along at a whopping 110 meters per second with a hydraulic braking mechanism that uses wheels at the front and either side of the pod.

“Fundamentally, the purpose was to demonstrate high-speed levitation technology that even at a small scale could be made more efficient than rail,” says team member Sabrina Ball. The key constraints were that the pod had to fit within the tube being built for the test track, and conforming to rules set by SpaceX. “The pod was built around levitation and braking,” she says.

Chris Merian, the team’s chief engineer, says they investigated three technologies on which to base the pod: air bearings, and active and passive magnetic levitation. “We wanted air bearings,” he says of the technology that allows air hockey pucks to glide over a table, but switched to magnetic levitation when SpaceX released the final competition parameters. Because of time constraints, “We wanted simplicity and the ability to conform with the track,” he adds.

Discarding air bearings created one problem; no one on the team had any experience or even knowledge about magnets. “We had to learn magnets from scratch,” says Merian.

MIT’s team came together from two separate groups, each working on the project without knowing about the other. “I started with friends in the mechanical engineering department,” notes Ball. At the same time, another group in the aeronautics and astronautics department began their own work in parallel with the MEs. The two got together with the idea of using the Aeroastro students’ knowledge of air bearings for the design and the MBA students’ business expertise for fundraising and marketing. Working from October, they put together the design for the competition—and then changed it using magnets—that was judged in January.

The team opted to utilize SpaceX’s propulsion system, similar to a catapult that launches jet fighter planes from an aircraft carrier. That freed up space within the pod and made it lighter. For the test, the pod does not include passenger or payload compartments. The 250-kilogram pod should be accelerated at 24G to a maximum speed of 110 meters per second, according to the team’s statement.

The magnetic levitation system incorporates two arrays of 20 neodymium magnets over two meters, the largest of which will measure 4 x 4 x 1/2 inches, says Merian. The pod will reach and maintain a 15-millimeter levitation gap at cruising speed and a peak lift-to-drag ratio of 14. To maintain lateral control and keep the pod centered, it will be fitted with passive magnets and active electromagnetic damping. In case of emergency the pod, to be fabricated with woven carbon fiber and polycarbonate sheets, has a self-drive system that can move forward and backward at one meter per second using low-speed drive wheels.

Since the judging in late January, the team was thrown a curve when SpaceX track requirements forced a redesign of the braking system. The test track will consist of an aluminum plate with an I-beam running down the center. Merian says they had planned a hydraulic braking system, and expected to attach some type of brass braking material to the I-beam. SpaceX, however, insisted the beam could not be damaged and the students had to rethink the brakes when they could not guarantee it would not damage the beam.

The student designers moved to an eddy current system using magnetic calipers placed over the flange to generate drag. Like many items being developed for the pod, it required a learning curve. Their biggest issue now is finding an actuator large enough to handle lateral forces, says Merian. The brakes also require purchasing another 100 magnets, adding about $5,000 to the cost. But the biggest cost increase is tied to sensors that measure the gap height of the levitating pod. Merian says the team needs ten, each costing about $1,000.

The next challenge for the team is to build the pod in time for testing that is scheduled to begin at SpaceX’s Hawthorne, CA, one-mile test loop. The effort will cost a little more than $100,000, which the team hopes will come mostly from corporate sponsors and alumni. They will compete against 22 other student teams that made the final cut at the competition judging, held at Texas A&M University.

Designing may prove a bit easier in some ways than building the pod. The team used CAD and a wide variety of software from mechanical, electrical and aeronautical disciplines, says Ball. ”With almost all the tools, someone had used them or had an experience to some degree,” says Merian. The team also drew on advisors and sponsors for feedback to specific questions.

Fabricating the pod will draw on other skills. “Most of the manufacturing is machining,” says Merian, adding that team members will be able to use equipment at local machine shops after business hours. He expects team members to do the work themselves as the design of the pod and its parts emphasized simplicity.

For Further Discussion
We wanted simplicity and the ability to conform to the track. We had to learn magnets from scratch.Chris Merian, Team Chief Engineer