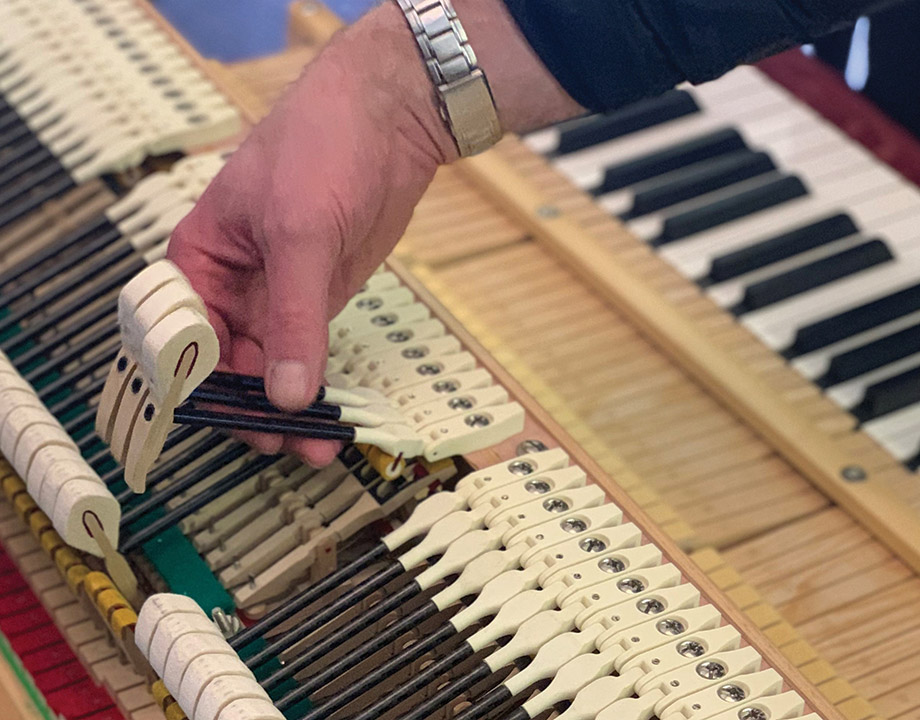 3D-printed piano hammer is the first major innovation in the instrument in decades. Photo: igus

The piano is one of the world’s most popular musical instruments, but its mechanics and design are much the same as those made a century ago or more. Now, an English piano builder—who is an engineer and a pianist as well—devised what is being called a unique hammer system incorporating 3D-printed tribopolymer components that produce improved sound as well as durability and climate resistance.

Phoenix Pianos founder Richard Dain became interested in improving piano design as far back as 2003, work that led to design of a carbon fiber soundboard, said Phoenix’s James Bacon, who advised on and built the prototype. He next turned his attention to the hammer assembly, which strikes the piano’s strings to create sound.

A traditional hammer assembly—unchanged since the 19th century—consists of three parts made from hornbeam wood: the hammer flange that is fixed in place; a hinged shank that defines the flight of the hammer; and the hammer itself.

Although hornbeam is very hard and durable, it suffers from changes in temperature and humidity. Over time, the assembly warps and drifts, causing irregular strikes that affect the sound. Technicians must adjust or replace the assembly to ensure predictable and quality sound.

Dain wanted to replace the wood with carbon-fiber and create a bush-less hinge assembly and approached Cologne-based igus because of its work with plastics and polymers.

Bushings are made from cylindrical felt inserts to provide an interface between center pins and wooden parts. Fitting them properly is critical but tedious; they must be snug enough so the hammer does not wobble but still allow smooth operation. Eliminating the bushing could create a more efficient system.

Bacon said igus engineers produced CAD drawings of the new design and suggested its tribopolymer material used in industrial applications as the replacement for wood. Bacon said the material is key to the new assembly’s success. 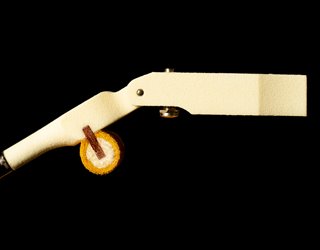 Polymer piano hammer was designed and produced with Germany’s igus. Photo: igus
“In a traditional wooden hammer assembly, you might think of it as a fork and blade assembly, there is a part in that system called the drop screw, which is part of the regulation of the piano, it's absolutely critical,” Bacon said. “And in a traditional wooden action it actually goes into blade, which is the center part. And they are very easily broken, because you're drilling quite a substantial hole through a very thin piece of wood and the amount of material either side is minimal.”

“It is an inbuilt intrinsic weakness to that system. So the first thing Richard did was to design this part the other way around, so the drop screw goes through the fork. After a number of iterations, we have gravitated upon using a 2.5-millimeter roller bearing. It's a very, very smooth and strong system and is highly effective in controlling the hammer’s flight,” Bacon said.

The pins are center points for the bush-less system. With a 30 percent increase in diameter, they are stronger, smoother and more dimensionally precise than traditional wire center pins, he said. “It’s 3D-printed material, we can create our parts from our files, which are enormously accurate,” Bacon noted.

He added that the material is very easy to ream, ensuring a firm fit for the center pins, and is not subject to temperature or humidity variations. A pianist himself, Bacon said the new assembly also better stands up to more powerful strikes that often cause the traditional wooden assembly to drift.

The assembly has been rigorously tested on a player piano and Phoenix now is manufacturing them for its line of pianos.