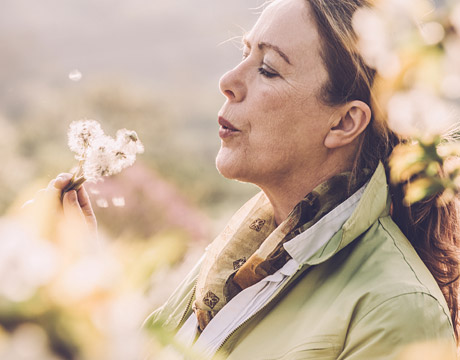 Stopping Lung Cancer, One Breath at a Time

Lung cancer may not be at the top of the news cycle the way it once was, but it’s still killing at an alarming rate. Rick Rummel, CEO of Louisville, KY-based Breath Diagnostics, Inc., says the real problem is that most of the time it’s not caught until it’s too late. “So many times it’s Stage 3 and Stage 4. But if you catch it early then many times the outcome can be very different,” Rummel says. “It’s sad it doesn’t happen more often. We’re out to change that.”

The company’s creation is all about getting close. Enough to capture breath. “There are over a thousand compounds in breath,” he says. “What happened was several doctors got together and figured out some of these compounds were elevated in some patients and they had to be able to measure it. Dr. [Xiaon-An] Fu was working on something for tuberculosis and adapted it to lung cancer. A patient breathes into a bag and we take that bag and run it across a microchip and then it covalently bonds with the chemical and then it involves a spectrometer. You have very specific masses so you can see if they’re elevated. When it’s elevated, it’s very elevated.”

Fu, an associate professor in chemical engineering at the University of Louisville and a co-founder for the company, says just capturing compounds was among the leading challenges. “You have to understand that these compounds are in low concentrations in the breath,” he says. “We needed to capture them from breath and then concentrate them into roughly ten microliters.” Ultimately the idea is to be able to use “ordinary instruments” such as FDMS (filter dynamics measurement system) to analyze those compounds, he says.

Fu says the microfluidic device uses 100 microliters of methanol and it flows through the chip for the washing process. He estimates the cost of the device to a patient might be in the low three-figures. “And the key is identifying the combination of compounds,” says Fu, who received his Ph.D. in chemical engineering from Case Western Reserve University. “One compound can be another disease.”

The company has studied 800 patients so far and is very encouraged by the results, according to Rummel. “We start with lung cancer and have a chance to take this to many other diseases,” Rummel says. “We want to get this to be very accessible to as many patients as possible. What we hope to do is have a low-cost test that a patient could take every year and monitor the markers. It can be a regular part of their prevention. Our cost should be well below the standard cost of a CT scan for lungs. And, remember, CT scans are radiation themselves so this can possibly change exposure there as well. It’s looking at other ways to fight this terrible disease.”

For Further Discussion
What we hope to do is have a low-cost test that a patient could take every year and monitor the markers. It can be a regular part of their prevention.Rick Rummel, CEO, Breath Diagnostics, Inc.