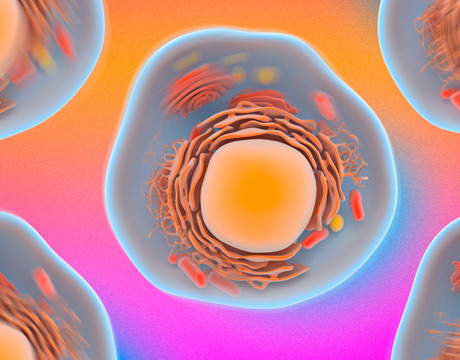 When considering cancer detection, people often think of obvious signs such as external symptoms or blood counts. But the stiffness of cells inside the body can actually be a vital clue. Cancer cells, for example, tend to be softer than healthy ones. If researchers can observe this softness, instead of physically probing for it, then cancer detection may be possible without using laser-oriented optical tweezers or other methods that damage the cells.

But how do you isolate this stiffness variable in order to measure it? MIT engineers, armed with an old Albert Einstein equation, have come up with a noninvasive method to gauge a cell’s stiffness by using standard confocal microscopy and film to observe the motion of its particles. Measuring a cell’s stiffness this way could be a key to not just finding cancer but monitoring its progress throughout treatment.

Ming Guo, assistant professor of mechanical engineering at MIT, and his team faced the challenge partly by using the Stokes-Einstein equation, created by Albert Einstein.

“During my PhD, I was looking at the dynamics of a cell when a system is under cell equilibrium,” Guo explains. “There are a lot of classic diffusion laws that have principles explained by Einstein.”

However, what about cells not under thermal equilibrium? Long-term research followed, which led to tweaking the equation to measure movement caused by physical force, not temperature. Guo’s lab had been mainly doing experiments using optical tweezers, which can use the force of a laser, for example, to manipulate microscopic objects. That force, however, can damage cells.

“So we developed in the lab direct imaging to look at the movements of particles,” he says. “This helps with the understanding of the non-equilibrium nature, and we can translate this movement.”

Guo likens this to the final touches on your morning coffee. The stirring of the spoon for the sugar is causing movement but so is the temperature. In this case, the researchers want to figure out the equivalent of the spoon’s role in the movement.

To do so, the researchers used a modified version of Stokes-Einstein to find the cell’s stiffness and, by filming the cell and watching each frame, they could separate the influence of temperature on the movement and focus on the physical forces. That eliminates the need to use optical tweezers and prevents the cells from being harmed.

The method needs further testing before it’s introduced to real-life medical scenarios, but Guo is optimistic.

“Doctors want to be confident enough in this that it can truly be a supplement,” he says, adding that the team also wants to use the method to monitor the ongoing health of cancer patients. “We hope this can help fight cancer better.”

For Further Discussion
Doctors want to be confident enough in this that it can truly be a supplement. Prof. Ming Guo, MIT