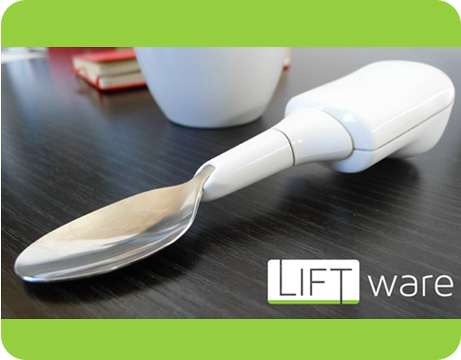 Ten years ago, Anupam Pathak was a Ph.D. student at the University of Michigan, Ann Arbor, working on a university lab project to help stabilize stressed soldiers’ rifle barrels. Soldiers shaking with fear, dread, or stress cannot fire accurately, but canceling the shaking stabilizes the aim.

Today, Pathak has used what he learned about canceling human tremor to help the more than 5 percent of the United States population suffering with essential tremor and to help others with neurological diseases like Parkinson’s that can cause trembling. A three-person startup company he founded, Lynx Design, of San Francisco, will soon release the LiftWare tremor-cancelling spoon under the company’s Lift Labs name.

The technique uses active cancellation hardware, which is currently used in noise-cancelling headphones. As part of his Ph.D. work, Pathak figured out how to make active cancellation hardware small enough to fit within the tremor-cancelling spoon. The utensil stops the bowl of the spoon from moving even while the handle itself may be trembling, which lets users can eat without spilling.

That may not sound like such a big deal. But for those whose tremors can stop them from feeding themselves, it is. The device can mean the difference between depending on being fed by a caregiver and being able to feed oneself, Pathak said. Essential tremor is a neurological condition that causes sufferers to shake involuntarily. And though it’s sometimes tied to another neurological condition, for many of the 10 million Americans with essential tremor, the cause is unknown, according to the American Neurological Association. It does appear more often in the elderly population.

“The basic issue I discovered is you can’t stop soldiers from trembling but you can accommodate it,” Pathak said. “With our device, we allow the hand to move but what you’re holding onto cancels its motion. Digital cameras already do this on a small scale so we’ve come up with technology to do it on a larger scale.”

Pathak did his research before creating the LiftWare spoon. He discovered that today’s tremor-assistive devices usually attempt to cancel movement and for that reason are big, bulky, and inconvenient. “You don’t want to use things like that in public and they don’t even work that well at home,” Pathak said. “Our idea was not to stop the hand from shaking but to cancel its movement. That way, we can make our device really small, the size of an electric toothbrush, and you can use it every day.”

The company has already created a device prototype and conducted clinical trials at the University of Michigan. The next step is to offer the device for sale through its website. The company plans to begin production in June and to eventually partner with distributors in the U.S. and Europe, Pathak said.

Click here to read the most recent issue of Mechanical Engineering.

With our device, we allow the hand to move but what you’re holding onto cancels its motion.Dr. Anupam Pathak, Lift Labs