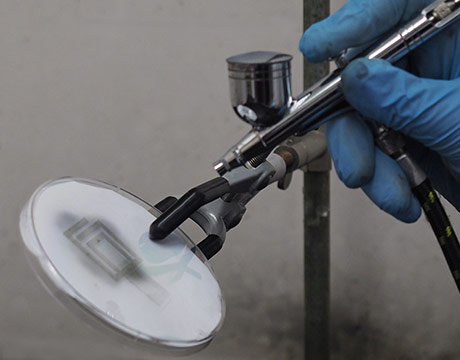 Spray-On Antenna Could Signal the Future of Wireless

Imagine adding wireless capabilities to a car, wearable device, piece of equipment, or a home appliance by just spraying on an antenna from a can.

Researchers at Drexel University say a spray made from MXene is the basis for next-generation antennae used for thin, flexible and transparent devices. A single coat of MXene could be a simpler and economic way to add wireless data collection, transmission capabilities and other smart features to factory equipment, engines, cars, and planes, to name a few.

"When you make transparent devices, if you want IoT, you need to have transparent antennas as well,” says Babak Anasori, research assistant professor at Drexel, adding that MXene can also be mixed with water or car paint. There may be many applications as IoT evolves.”

MXene could be a replacement for copper, which is at the core of wireless communications in devices today.

For You: Nano is Engineering’s New Frontier

Drexel researchers originally synthesized MXene, by mixing carbon or nitrogen with a metal carbide, in 2011 to create a practical alternative to graphene. They knew MXene was strong and durable, but the antenna behavior came as a surprise. The researchers, however, found the material retained its metal conductivity in bulk, making it an effective antenna. When they sprayed MXene ink onto an object, the researchers found it performed as good as copper antennas.

“Spraying MXene is like dropping many sheets of paper on a desk. They just come down and sit on the surface,” Anasori says. “There are many sheets of this, but they do not lose their metallic conductivity. That's a huge benefit for different applications like antenna.”

The researchers made two strips of antennas with MXene sprayed on two films. A network analyzer used to test antennas recorded wireless performance at frequency ranges from 1.5GHz to 3.5GHz. They got peak performance – a measure of data speeds and signal reach – at the same 2.4GHz frequency used by Wi-Fi and Bluetooth. MXene is made from titanium carbide with carbon atoms in a 2D form. A layer of MXene consists of three layers of titanium atoms and two layers of carbon atoms. “We wanted to see what substrates we could spray on,” Anasori says. “We spread it on paper but that adds roughness and thickness. We did it on transparent sheet with less surface roughness,”

MXene is simple to produce. It takes an undergraduate student with little training about 24 ours to create 100 grams, Anasori says. That compares favorably to graphene, a hard-to-produce material also being researched as an antenna.

Antennae in today’s wireless devices are typically attached to circuits, which will still be needed for MXene. But the material is easy to deposit and can be implemented in existing fabrication plants. Moreover, just a few grams of MXene can be spread across an entire football field, which means a lower volume would be required to put antennas on devices. Modems used in the latest phones have dozens of antennas and are complex to produce.

Having this simple processing and being transparent, it opens up a new direction of antennas.
Prof. Babak Anasori, Drexel

"Having this simple processing and being transparent, it opens up a new direction of antennas,” Anasori says.

The researchers will now formally study how MXene behaves like an antenna. One research area is to understand how 2D MXene sheets based on different metal carbides interact with electromagnetic waves, how it can form the ultimate application, and its frequency range. The research could also explore areas like communications range, which important in determining if the material could be used in modems for 5G communications, a critical component in connecting factories.