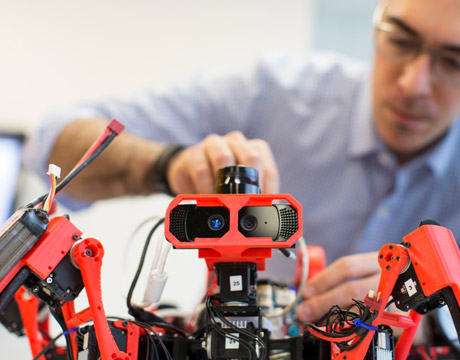 It’s a spider. It’s a robot. It’s a 3D printer. It’s a fully autonomous spider-like robot, which can work collaboratively with others of its kind to 3D print complex structures and surfaces.

“We wanted to use robots in collaboration because at the end of the day they are general purpose machines that build and move over time. If you have several working together they can achieve the objective faster, says Livio Dalloro, who heads the product design, modeling and simulation research group at Siemens Corporate Technology.

The SiSpis not only work together, they also talk to each to each other. Using algorithms and software they are able to plan and organize the collaboration. A spider robot with low battery can find its way back to the charging station and alert the other robot to take over the task, enabling seamless completion of work.

In January 2014, Dalloro’s team set out to create a mobile manufacturing platform. “Our goal was to create a prototype platform for autonomous manufacturing machines that can understand a task, split it up among available robots, and enter into a manufacturing process in a collaborative and coordinated way without explicit programming,” he says.

“We came up with a concept of creating a general purpose 3D printer that can move and then see how we can engineer it by looking at the system level,” says Dalloro.

At the design stage, they first considered a wheels-based model but decided to opt for an insect-like design. “We were thinking of a spider that can move in a 3D space and is agile. So we created a robot with six legs and one arm – the extruder – similar to those found in a 3D printer,” says Dalloro. With the project’s focus on advanced manufacturing, each time a component was designed, it was produced using 3D printing.

Powered by Siemens’ NX PLM software, each robot is equipped with a camera and laser scanner to do the calibration and mapping that allows it to move and identify obstacles. In addition, the robots have Wi-Fi and Bluetooth capability to transfer information to each other and communicate. “They negotiate and agree which part they will be able to manufacture. Each robot splits the part and works autonomously,” explains Dalloro.

As with any autonomous system, the research team faced challenges in localization and mapping. After optimizing the localization aspect, they focused on the kinematics for moving the robots on a flat surface. According to Dalloro, some of the major challenges were on the communication side. “The more we experiment more challenges will pop up,” he adds.

SiSpis are currently able to print flat surfaces, such as a 3D cuboid, but the research team is looking into printing precision parts in the future. “Currently we are only working with PLA but as a research platform we want to modify with time and easily change the type of material and extruder,” he says.

“At the moment we have three robots and we want to scale it up as needed to achieve the collaboration. The next step would be to try out different manufacturing processes so we aim to scale up the same design to a larger level and make it more robust,” says Dalloro.

As the technology matures, he envisions potential applications in the building industry where a container full of spider bots could be deployed for building a settlement where human activity would be difficult. The current focus for the team, however, is to continue experimenting and improving the platform.

“We are essentially a research lab and this is meant to be a research platform, a playground for the team that we keep improving as we learn and develop it further,” says Livio. Categorizing it as a “moonshot” type of approach, he says, “We expect there will be a variety of applications in traditional manufacturing.”

For Further Discussion
Currently we are only working with PLA but as a research platform we want to modify with time and easily change the type of material and extruder.Livio Dalloro, Siemens Corporate Technology