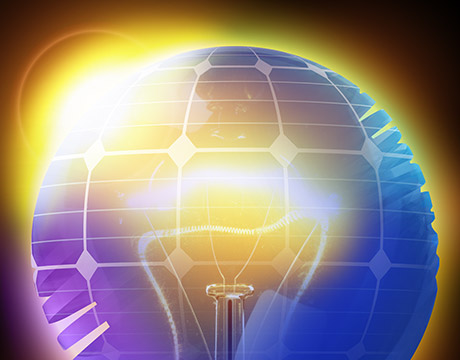 Solar Power Gets a Charge

Solar energy keeps advancing from a technological standpoint but the question of cost is still a big one. Song Jin, professor of chemistry at the University of Wisconsin at Madison, says solar cells and bypassing electricity can go hand in hand to offer a possible solution, and his team’s device combines a solar cell with high-capacity storage.

Jin is part of a team whose mission is to make this solution happen, with the help of the redox flow battery, which generates electricity through a liquid electrolyte tank and, he notes, is much cheaper than building a battery pack. Changing the mechanical state of the electrolyte causes a reduction in oxidation, which is why they call it a redox flow battery, he explains.

“People are looking for large storage that is cheap or scalable enough, but how do we go to scale?” he says. “Lithium ion batteries might work well for electronics but we’re talking about utilizing the sun at night for your house. The reflow is a cheap opportunity because you want to have capacity [for the electric grid].”

The team went with the thought that one doesn’t need to separate solar cells and full batteries.

“Why not just have one device to get solar power and put it into chemical energy? You still have flexibility and you can take electricity out without charging the battery,” he says. “Having such devices will give one-stop solutions if you want to harness solar energy. In the daytime, when you don’t use [energy], charge liquid and electrolyte in the tank, store it in the tank, and use it to regenerate electricity. What we did is easier than the method of water on hydrogen. With hydrogen, you have to store it in a storage device. My point of view from a chemistry perspective, this was a solution that was better. Maybe theoretically you want to have as high a storage capacity as hydrogen, but you have the negatives.”

The device uses silicon solar cells, which are put in a chamber and the cell converts energy and the electrolyte is charged, he says. He points out it also sends energy to the electrolyte of the battery right away.

“But if you wish to not go into the battery and just draw electricity out, you could easily do that, too,” Sing explains. “The key is you want to store energy for nighttime use when you have a higher demand for electricity. It will give more direct, more efficient, simpler, and hopefully a cheaper solution. The battery for the electric grid, if you want to use electricity with a solar cell, the electrolyte goes back from the tank, back into a container, and the chemical reaction will happen and that will send the electrons out, for light for a light bulb as just one example.”

Though Jin says there are a number of improvements to make in the areas of efficiency and putting in stabilities, he says there is a good chance that the next few years will see above 10 percent efficiency.

“It’s still too early to say how much money it could save,” he says, “but it definitely has the potential to be a helpful boost for using solar energy.”

For Further Discussion
The key is you want to store energy for nighttime use when you have a higher demand for electricity. It will give more direct, more efficient, simpler, and hopefully a cheaper solution.Prof. Song Jin, University of Wisconsin at Madison