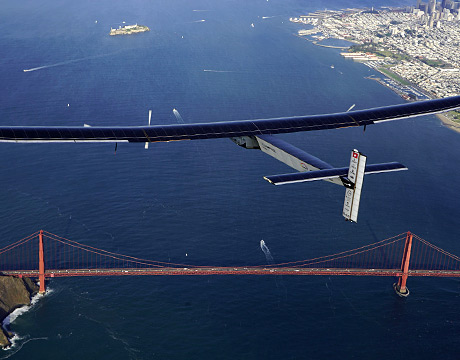 Solar Impulse 2, the long-range, solar-powered airplane completed its round-the-world flight on July 24—many months late, sure, but its developers, who are also its pilots, weren’t in a hurry.

Bertrand Piccard and André Borschberg led the development of the airplane and spelled each other piloting the aircraft, sometimes flying continuously for days at a time. They flew the plane approximately 40,000 km in 17 months. The original estimate was a journey of five months, but the plane was delayed for repairs in Honolulu for several months.

Piccard has previous experience with unconventional flight around the globe. He and Brian Jones completed the first nonstop round-the-world flight in a hot air balloon, the Breitling Orbiter 3, in March 1999. At takeoff the balloon carried 3.7 tons of liquid propane. At the end of the flight there were 40 kg left.

According to Piccard, the mission would have failed if the last bit of fuel had run out, and that experience triggered the idea of flight without fuel. Piccard presented his idea for a solar airplane to a Swiss committee, which conducted a feasibility study. Borschberg headed the committee and was so impressed by the idea that he joined the project.

The current plane’s predecessor, Solar Impulse 1, was a prototype that was tested in Europe, flown to Africa, and later flown across the U.S.

Solar Impulse 2 is equipped for much longer flights. The plane’s total mass is 2,300 kg. It carries 17,248 solar cells and 633 kg of batteries capable of storing 65.5 kWh of energy. The plane's cruising speed is 70 km per hour.

During one leg—a five-day nonstop marathon from Nagoya, Japan, to Honolulu—the plane’s batteries overheated and were damaged. Replacing them delayed the aircraft in Honolulu until the end of the flying season. Flights resumed this May.

The entire trip was accomplished in 17 legs, starting and ending in Abu Dhabi in the United Arab Emirates, but with no set flying schedule. The ultralightweight aircraft had to wait for appropriate weather and sometimes to alter its flight route.

A spin-off organization, the International Committee for Clean Technology, was announced while SI2 was crossing the Atlantic. According to the group, there are plans to develop solar-powered drones.