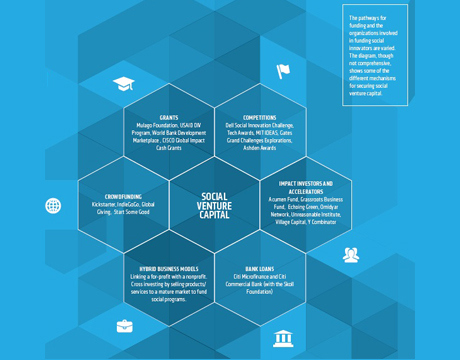 Social Innovators Need Money and Funders Want to Give it to Them.

Why is it so hard to get everyone on the same page?

In 1961, in a blitz of New Frontier-era optimism, President John F. Kennedy established the Peace Corp and, eight months later, the U.S. Agency for International Development (USAID). At the time, direct government aid represented around 85 percent of all of the capital flowing to the developing world. Fifty years later, this sector looks very different. According to the National Journal, direct government assistance now represents just one-tenth of capital entering developing countries. Making up the difference are remittances, philanthropic initiatives and private business investments, among other new funding models predicated on a fusion of different theories, aided and abetted by the advent of the Internet and the rise of international social entrepreneurship. USAID’s Development Innovation Ventures (DIV), founded in 2010 by USAID Chief Innovation Officer Maura O’Neill and Harvard Economist Michael Kremer, relies on one such “fusion” funding model. DIV is patterned after Silicon Valley’s hightech, high-risk, big-payoff (if you’re lucky) model, combining methods from venture capital and academia to create a model for sourcing cost-effective development solutions. Where Silicon Valley and DIV diverge is after they reach the market: if your metric for success is not necessarily financial, how do you prove that what you’re doing is actually creating impact?

This is the multibillion-dollar question being bounced around the social-entrepreneurship sector, and attempting to answer it is to address the myriad pain points on both sides of the equation. On one side are funders with limited time to review endless reams of proposals and limited resources to ensure that what works in theory will also work on the ground. On the other are the grantees who gripe about, among other things, high administrative costs; decreasing pools of grant money; a lack of partnerships for feedback on product feasibility; the longterm elbow-grease-fueled work involved with much in-field testing and evaluation; the outsourcing of larger projects to inept companies with brand recognition; and a gap in early-stage seed financing.

Mulago Foundation managing director Kevin Starr agrees with this last point, though he cites the for-profit Y Combinator and nonprofits Unreasonable Institute and Echoing Green, as well as Mulago, as examples of organizations that fund early-stage work. “There are a fair number of organizations that take people early on, but it’s not very well organized and there’s not enough of them,” he says. But Starr thinks the real problem begins after the seed money is gone. “It’s a classic situation I’ve seen time and time again, where [the grantee] gets some seed funding from their own savings, or their family or friends, or from an angel investor then they start developing their idea and it looks promising, but then they run out of money before they’re ready for prime time,” he says. “You need to overestimate what you need, think about that next level and start lining it up. If you don’t line it up [early] you’re probably going to fail.”

For agencies like USAID DIV, the answer to the question of “how do we know what we’re doing is working?” lies in randomized controlled trials. “Sixty-eight percent of our grantees conduct randomized controlled trials, so [ideally] it’s a combination of using that methodology to really test whether or not things are having the right outcome, and also measuring end goals or something highly connected to end goals,” says Jeffrey Brown, USAID DIV’s Division Chief. “Not just, ‘were more people trained?’ but did they really learn things, were their behaviors still changed a year later?” DIV funds projects at three tiers, or stages. At the first stage, an organization is expected to establish proof of concept and innovation, and funding is generally capped at $100,000. During stage two, the organization is expected to evaluate solution at scale with rigorous impact testing, with funding up to $1 million. And during stage three, with criteria for stages one and two already met, an organization is expected to transition their program to widespread adoption, reaching millions of people within 10 years, with up to $100 million in funding. The reason for the three-tier system is to weed out weak projects before they turn into the sort of boondoggles that traditional aid organizations are often accused of funding. “We expect that not all of our projects will succeed—that’s why we initially go in at the 100K level,” says Brown. “We think it’s realistic that some of our projects will [work]. If they don’t, we find out quickly and cheaply.” The DIV application process is twofold: interested parties first submit a five-page letter of interest to DIV. DIV then selects the most promising of those letters and invites those organizations to submit full applications, each of which can run a total of 50 pages in length. To date, DIV has received 3,167 full applications and they’ve invested in around 60 of them in 24 countries around the world, with more in the pipeline. All projects save one are at the stage one and stage two levels, with a small majority clustered at stage one. Any organization can apply at any tier, and the process at each tier is the same. Applicants can expect the entire process to take roughly six months, from the time they submit the letter of interest to the time they get funding. DIV offers feedback at both application stages, though they offer more detailed feedback after the full application has been submitted.

Starr has a very different philosophy when it comes to grant-giving. He credits USAID with trying “something cool” with DIV, though he’s lukewarm on the DIV approach. “To date, USAID [doesn't] know how to invest for success,” Starr says. Regarding DIV, he says, “Good ideas should get funded, and the idea that there are only [a few] of those doesn’t make any sense to me, and I think processes like DIV’s that attract a ton of applicants really wastes people’s time. If there are a thousand applicants and they each spent 20 hours applying, that’s 20,000 hours wasted.”

Starr’s—and the Mulago Foundation’s—philosophy is deceptively simple. For one, they look for people to fund instead of accepting proposals. “I hate to say no, and you say no a lot less if you’re looking rather than just being passive and responding,” Starr says. Mulago funds on the basis on three things: a problem that clearly fits their mission; a scaleable solution; and an organization that they think can deliver. Starr also believes that an organization worth funding should be able to channel its vision into an eight-word mission statement. “What are you setting out to do? Are you saving kids’ lives, are you getting Zambian farmers out of poverty? The mission statement isn’t supposed to be exciting. It’s not branding.” In other words, loose verbiage dotted with words like “sustainability” and “empowerment” often indicates that the organization’s goals are muddy. “A good eight-word mission statement helps guide more established organizations through the necessary iterative process of re-design,” Starr says. “For a startup, it’s a opportunity to evolve their big idea without getting pulled off track by their business model, the demands of funders, or the latest shiny object they found by the side of the road.”

Daniel Ignacio Garcia founded the Emergent Engineers startup a year ago, and has applied for aid from multiple organizations with lackluster results. He sees flaws with both traditional World Bank-style funding and DIV’s three-tiered model. For him, the real problem is a “missing line item” in programs that don’t factor in basic infrastructure issues, something his startup targets, fixing rural roads and irrigation systems and the like. “You can improve a village’s crop productivity, but how can you export products if their road is in shambles?” he says. Regarding DIV, he says, “Voluminous administrative [costs] curtail or strangle the funding that comes into these organizations—the amount of paperwork involved is too much for a small firm to handle.”

Peter Haas, executive director of small business incubator at the Appropriate Infrastructure Development Group, agrees, but sees all the paperwork as a necessary evil. “It’s 60 percent paperwork and 40 percent action, but that’s the way it is with all grants.” Haas sees a bigger flaw with the “big ideas” dreamed up by aspiring social entrepreneurs: too much innovation, not enough implementation. “Many [social entrepreneurs] are not working continuously with the community,” he says. “They design things that people don’t want, so the project wins awards but then just sits on a university shelf somewhere. Starr agrees: “If people don’t have a plan to implement when they innovate, it goes nowhere.”