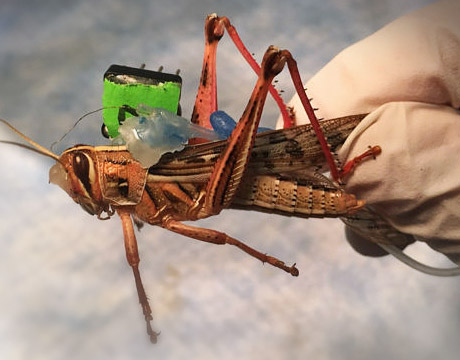 Both the federal government and the private sector are always looking for better, safer ways to inspect dangerous or challenging terrain, or to look for hidden explosives. One area that engineers and scientists turn to for inspiration is the highly developed sense of smell in animals. Currently, the canine olfactory system is the state-of-the-art sensing system for many engineering applications, including homeland security and medical diagnosis. However, it takes considerable time and resources to train and condition these animals, and field deployment can be challenging.

Now, a team of researchers at Washington University in St. Louis has turned to insects to develop a more sensitive detection system, specifically, locusts.

Baranidharan Raman, associate professor of biomedical engineering, is working with the Office of Naval Research (ONR), Arlington, VA, to use the highly sensitive locust olfactory system as the basis for developing a bio-hybrid nose. Raman has been studying the insect sense of smell for over a decade. The sense of smell, he notes, being a primitive sense, is highly conserved across different species. There are striking similarities—both anatomical and functional—between insects and other higher species. It is also one of the hardest systems to replicate.

“If you ever want to humble an engineer, ask him/her to build an electronic nose that has the same capabilities as the insects,” says Raman. “This is one of the main projects that I have been working on since my graduate student days, and it is a humbling experience for sure.”

Raman has been studying how sensory signals are received and processed in the relatively simple brains of locusts. He and his team discovered that odors prompt dynamic neural activity in the brain that allow the locust to correctly identify a particular odor, even with other odors present. Locusts trained to recognize certain odors can do so even when the trained odor was presented in complex situations, such as overlapping with other scents or in different background conditions.

"We hope to take advantage of a biological solution,” Raman says. "Even state-of-the-art miniaturized chemical sensing devices have a handful of sensors. On the other hand, if you look at the insect antenna, where their chemical sensors are located, there are several hundreds of thousands of sensors, and a variety of types."

There is a growing need for safer, cost-effective, non-invasive chemical sensors for biomedical and homeland security applications. Raman fully expects to develop and demonstrate a proof-of-concept, hybrid locust-based, chemical-sensing approach for explosive detection. He continues to be surprised and impressed by the elegant, yet sophisticated, approaches nature uses to deal with the many practical challenges in smelling.

“Think about the smell of a chocolate chip cookie,” he says. It is the same whether you smell it in the coffee shop or grocery shop [different background odorants], whether you smell it in winter or summer [different ambient temperatures], on a rainy day or on a sunny day [humidity is a killer for chemical sensors], or a windy day or not-so-windy day [the temporal plume structure will change]. “Each of these tasks is by no means an easy feat of engineering,” Raman adds. “Yet, this is resolved easily by the first few neural circuits in the insect olfactory system. Most engineering problems have already been encountered and solved by biology, although, to be fair, biology does have a lead of a few million years over us.”

For Further Discussion
If you ever want to humble an engineer, ask him/her to build an electronic nose that has the same capabilities as the insects.Prof. Baranidharan Raman, Washington University