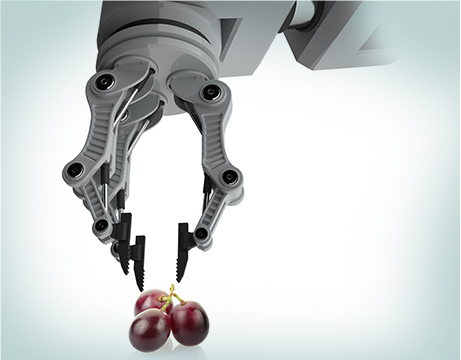 Harvesting “high-value” crops like wine grapes is a time-consuming, laborious task. Imagine if a robot could be designed that would not only know which grape is ready for picking and which isn’t, but would also have the ability to gently grasp the fruit and remove it from the vine without damaging the grape.

That robotic technology currently is being developed by a European consortium consisting of engineers and other scientists from universities and private companies across the continent. The group is well on its way to developing the technology for a robot to do not only basic routine chores for crops such as peppers and apples in addition to grapes, but may be able to identify and pick ripe fruit and target spray to specific areas of plants as well.

Different universities using a range of technologies—including nanotechnology, materials science, mechatronics, and computer science—are working on different aspects of the project, which has been divided into 13 work packages.

The Institute of Applied Mechanics of the Technical University of Munich is responsible for package No. 3, which includes the robotic arm, with the objectives of designing, modeling, manufacturing, and optimization of “low-cost, lightweight, modular and compliant manipulators with exchangeable end-effectors and their motion control.” The institute has developed a prototype for a multi-purpose agricultural manipulator, which can be used for grapes, peppers, and apples. However, different types of grippers, or end-effectors, with different cutting devices must be developed for handling each crop.

Other universities involved include Israel’s Ben Gurion University of the Negev, which is developing intelligent sensing and manipulation algorithms for the robot, and the University of Ljubljana,in Slovenia, is leading the work on the sprayer.

The project, called Clever Robots for Crops (cRops), began in 2010 with funding from the European Union and is coordinated by Dutch-based Wageningen University & Research Centre. The project’s first demonstration of how the systems all work together is planned for later this year, with the completion of the project scheduled for 2014. After that, it is not clear what the next steps will be and when such robots may be available commercially even if the research phase is successful.

If all goes well, the robot will be able to detect the fruit, determine whether it is ripe and if so, approach the fruit, grasp it, and gently detach it. Down the road, the work may be able to be used for other agricultural applications where robots have not been employed as much as in the manufacturing field, for one reason because agricultural tasks are rarely strictly repetitive but require sophisticated learning and sensing technology.

Prof. Yael Edan, Ben Gurion University team leader of the cRops project, says the main contributions that this project will make are the development of a new modular mechanical design and the algorithms that will allow the robot to adapt to varying conditions. “We plan to develop a ‘plug-and-play’ concept,” she adds.

"An agricultural robot must be equipped with intelligence so as to be able to robustly operate in the unstructured, dynamic and hostile agricultural environment,” she explains.

Mechanical and industrial engineers are involved in everything from the development of intelligent grasping to the development of a platform for the robot that will adapt and accommodate various modular devices, such as sprayers and harvesters.

This is not the first project involving such use of robots in agriculture, but it may be the most ambitious. A Spanish company, Agrobot, sells a robotic strawberry harvester that locates the berries, analyzes each fruit, and determines whether it’s ready for picking based on its size and color, and similar work also focusing on strawberries has been conducted in Japan. The British firm CMW Horticulture sells a crop-spraying robot for greenhouses and nurseries.

Some experts predict that robotic devices will be doing much of the work on farms by the middle of this century as driverless tractors and machines that can identify and zap weeds are also coming down the pike.

An agricultural robot must be equipped with intelligence so as to be able to robustly operate in the unstructured, dynamic and hostile agricultural environment.Prof. Yael Edan, Ben Gurion University