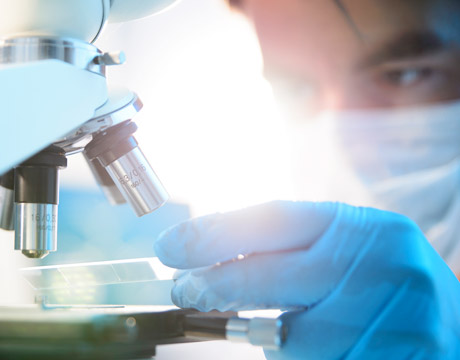 The Smallest 3D Print Job Yet

Tiny soccer players of the world, rejoice. Researchers at Oak Ridge National Laboratories have produced the universe’s smallest 3D printed soccer ball. Not only have they created the technique to 3D print such nanostructures, they’ve developed software that will allow anyone to create their own nanoprototypes with focused electron beam-induced deposition technology.

The method springs from instrumentation and techniques already used to make integrated circuit mask repairs: Gas is flooded into a system and adsorbed on surfaces. When an electron beam strikes the target area there’s a probability of creating a reaction.

In the early 2000s, Japanese researchers built solid three-dimensional objects at the nanoscale with an electron beam that scanned back and forth, building up layers one at a time, much as today’s macro 3D printers do. “They showed that there is a pathway to make truly 3D objects,” says Jason Davidson Fowlkes, a staff scientist at Oak Ridge’s Center for Nanophase Materials Sciences, who leads the research. But moving from solid blocks to more complicated structures is only one of the hurdles that needed to be jumped. Another big one was keeping things clean: previously, a lot of unwanted carbon would be left where the beam hit metal. “We’ve simultaneously shown both these things,” says Fowlkes. “You can make something three dimensional and you can purify these materials too.”

To put their beam to proper use, Fowlkes and his team had to grapple with the statistical nature of electron beam deposition. Material is added at the intersection of the beam and the object. If that contact is lost, the process comes to a halt. As electrons pass through the solid they send secondary electrons flying, increasing the chance of lost beam contact. Fowlkes developed a “finite difference method” to overcome the problem. “It’s almost like a statistical model,” he says. “You can’t believe any one event it tells you, but cumulatively over time, when you average those events, you start to see a realistic picture.” The simulation has to include a lot of variables: adsorption of the gas, its distribution on a surface, and how it moves around once it’s there.

The potential applications are as many as they are small, including nanosensors, nanobiotechnology, quantum computing, and anything that might need to be built on a nanoscaffold. To put the technology directly into the hands of those who can make the most use of it, Fowlkes has been working on making the whole system user friendly. “I’ve created a software package that allows you to design an object on the screen in three dimensions,” he says. “You can go in and run a few experiments for calibration, upload those into this program, and then it spits out a file which you can then take to the instrument and deposit the object that you’ve created on the screen.” In the simulation, users will be able to test out the many different ways the beam can be scanned to make the same object. Fowlkes has run the same process on Oak Ridge’s helium ion microscope, which has allowed him to make the same structures, but smaller, faster, and more efficiently.

But however efficient new iterations of the technology, this nanoprinting is currently most useful for prototyping. Someone will have to invent a multi-beam electron instrument before it can be put to use in manufacturing. And there’s still a kink or two to work out on Fowlkes's end. Right now, removing carbon from the object to clean it results in some distortion. “This is sort of the last step,” he says.

“Once we can get rid of this distortion, it’s a 'game on' kind ofthing.”

It’s almost like a statistical model. You can’t believe any one event it tells you, but cumulatively over time, when you average those events, you start to see a realistic picture. Jason Davidson Fowlkes, Oak Ridge National Lab