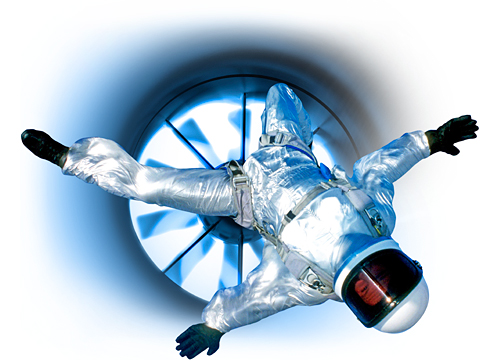 Skydiving on the Ground

Jump out of a plane and you’ll have less than a minute of freefall before you’d better open your parachute and properly save your life. That may be plenty of time for a half-terrified first-timer. But for anyone hoping to learn how to maneuver in the sky, it’s painfully short.

Modern skydivers are a pretty agile lot. They can fall upside down, rotate, revolve, maintain a sitting position, dance, circle around friends, and join up in formations of hundreds. To do any of those things requires learning new skills. Just as swimming involves different muscles and movements than walking, getting where you want to go in the air requires learning which motions put yourself into a vertical spin, a horizontal spin, a slower fall, a faster fall, or a horizontal slide, just to name a few essentials. Greater finesse requires finer movements, and that means more air time.

Until recently, more air time meant another take off, another ascent to altitude, another packed parachute, another hit to the wallet. Every twist and turn had to be learned in short bursts of falling. Just to learn to maintain in a stable position might take a dozen jumps or more.

That’s all changed to thanks to an amusement park ride. The vertical wind tunnel has allowed skydivers to practice the most basic freefall fundamentals and the most advanced tricks without leaving the earth—by more than a few feet. Without entering a plane, a child can learn in days what once took freefallers years to master. The serious skydiver can do more in the sky now than anyone previously had ever dreamed possible.

The first vertical wind tunnel appeared in Dayton, OH, at the Wright Patterson Air Force Base, in 1944. Its purpose was not amusement or sport, but to test model aircraft. Twenty years after its construction, a test jumper named Jack Tiffany was testing out various aircrafts with his colleagues. By 2 am, everyone was “a little slap-happy,” as he once put it. Having made a couple hundred jumps out of an airplane as a test jumper, he decided to try out the tunnel himself. He hopped in and managed to “fly.”

It took a few years, but the Army capitalized on his success by training their crack parachute team, the Golden Knights, in the same facility. As there was just the single tunnel—one with other purposes—few other jumpers practiced there.

But in the early 1980s, Canadian inventor Jean St-Germain patented his own vertical wind tunnel (which he called a “levitationarium”). The tunnels began to crop up here and there. But thanks to low air speed and high turbulence, they didn’t really take off until the 21st century. Now they’re peppered all over the world.

The vertical wind tunnel manufacturer Aerodium,based inLatvia, did away with the chamber all together. With fans below, freefallers levitate unencumbered in the open air, a trick performed at the Turin Olympics in 2006 to the astonishment of onlookers.

Both recirculating and non-recirculating wind tunnels have their downsides. The fans on the non-recirculating kind are so loud that you can hear them from miles away. They make whatever neighborhood they’re in feel like the tarmac at LaGuardia Airport. Recirculating tunnels have to find some solution to the heating of the reused flow. “You have to have some type of windows, to exhaust the hot air,” says Freddy Leal, a mechanical engineer at Tuuci, Inc., Miami, FL, an umbrella manufacturer. The open-air design has its own challenges. “If you weigh less than a certain number of pounds, it will blow you way out of the system, and if you’re too heavy you’re not going to fly.”

Leal and his classmates at Florida International University created an alternative design that would avoid these pitfalls. “We kind of mixed them up a little—we came up with a design in a J shape,” says his compatriot Alexis Anchunida. Their tunnel has the fans drawing air horizontally in an underground shaft. The lower end of the J is an opening that rests above ground. The other end, also above ground, contains the freefall chamber. With this arrangement, air is freshly drawn and cooled by the earth. And that same soil will dampen the fans’ roar. Winglets at the bends of the system keep turbulence to a minimum.

Where other wind tunnels are tailored for the amusement of landlubbers, the J-shape tunnel was designed with the skydiver in mind (partly explained by the fact that Leal himself is a novice skydiver). “The engineering challenge is to simulate the freefall experience from a plane—the same speed of the freefall, the same speed of the air, the resistance of the air, and all the aspects that are involved in a freefall,” says Anchunida. To that end, four propellers, pumping a million cubic feet per minute each, will move the air at 160 miles an hour.

The only problem with the wind tunnel is that the only version that’s been constructed is the 1:17 scale prototype the team made (and the only person to have flown in it is a 1:17 scale doll). Until more funds fall their way, skydivers will have to continue practicing in the noisy, hot-aired tunnels in existence.

The engineering challenge is to simulate the freefall experience from a plane.Freddy Leal, Tuuci, Inc.