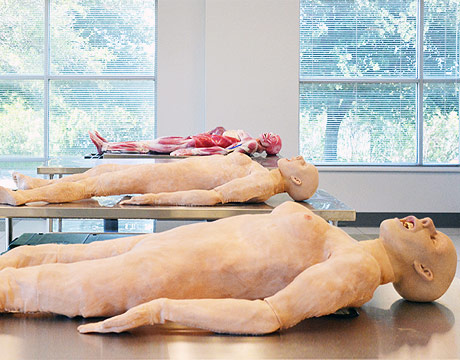 There may be seven billion people or so on the planet, with about 105 of them dying each minute, but a good body is still hard to come by. And expensive.

But now those in need of an anatomy lesson no longer have to wait for accidents to befall people with the word “donor” on their license. Instead, they can purchase the hyperrealistic “SynDaver” dummy and root around organs, bones, muscle, and tendons without having to chuck them out when they’re done.

The fake body is the brainchild of mechanical engineer Christopher Sakezles. He first had the idea while in graduate school. “It was essentially a quest to find a material to mimic one thing, which was tracheal mucosa,” he says. “I was developing an intratracheal tube and needed something to test it in.” It wasn’t much of leap to realize that the world was filled with people who needed to test tools in realistic bodies that weren’t real bodies.

Achieving the realism necessary for serious medical study and practice is an arduous, painstaking process. “We don’t use ASTM standard tests because what we are doing is sufficiently different from what is generally known,” says Sakezles. As a surgical learning tool, it’s the feel of living tissue that needs to be emulated. So Sakezles carefully builds up a data set for every element of the body, which includes puncture resistance, abrasion resistance, tensile modulus, and coefficient friction. “What we do is we control both ends,” he says. “We control the testing of the live tissue, and also the testing of the analog material. And we do it on the same equipment in the same conditions in every single case. That’s why our mimics are so good.

The result is a body that is, by design, as fragile as the real thing. It’s also as hard to put back together. So after the student of anatomy has browsed the internal inventory, or the student of surgery has made a few practice incisions, the doll is shipped back to Sakezles for reconstitution. “We sell them with a service contract,” he explains. “They get shipped back and forth, between our factory and the user, and they get refurbed.”

While the mannequins are perfect for training the nursing student who needs to locate the inferior vena cava, or allowing a young surgeon-to-be to get a feel for slicing the dorsal radiocarpal ligament, they are not yet detailed enough for dissection in a med school gross anatomy class. “It’s a work in progress and it probably will be for my lifetime,” says Sakezles. “There are certain things not in the body yet. It’s at the point where we have all the organs, muscles, bones, and tendons; we’ve got the great nerves, and the great vessels, and as time goes by we’re adding in things that are missing—there are no sensory organs in the body yet—and improving things that are there and aren’t missing.”

But those in the market for a faux cadaver don’t need to consider waiting for later, more detailed versions. As the models come back to him for refurbishing, Sakezles includes all upgrades.

Medical education is not the only field to recognize the benefits of a good realistic body. The SynDaver has had its share of the spotlight, appearing on Shark Tank, Shipping Wars, Myth Busters, Crossbones and “practically every episode of Grey’s Anatomy.” The military has used them as well, for training soldiers and doctors to deal with trauma, as well as for weapons and armor development. “Any kind of application where you are trying to design some kind of device or process that interacts with the human body, that’s a potential application for a SynDaver,” says Sakezles.

Whatever the purpose, the mock carcass, with educational discounts, goes for $40,000. The price of a real cadaver is rarely as high as $15,000. But “the important difference is basically this: the SynDaver is a one-time acquisition, the cadaver is a disposable one.” And when it comes to real bodies, that $15,000 is only the price of the flesh and bones. “The facilities that are required to house a cadaver lab are monstrously expensive, the personnel costs are monstrously expensive."

“We’re talking tens of millions of dollars to have a facility like that, whereas you can take a SynDaver and plop it down on a break room table with no worries.”

Any kind of application where you are trying to design some kind of device or process that interacts with the human body, that’s a potential application for a SynDaver. Christopher Sakezles, inventor, SynDaver