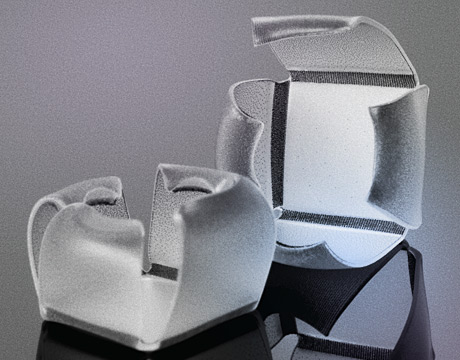 Engineers have used black ink and a heat lamp to induce sheets of plastic to fold and curl into complex shapes. Image: North Carolina State University

Researchers have designed and built small, self-folding structures for years. But the shapes that they could design have always been limited by the straight-line hinges embedded into the material. Geometric solid shapes like cubes and pyramids were easy; more complex, flowing shapes were impossible.

Now, a team of engineers at North Carolina State University in Raleigh has developed a technique using black ink to make 2D plastic sheets curve into 3D structures, such as spheres, tubes, bowls, and even more complex shapes.

Michael Dickey and Jan Genzer, professors of chemical and biomolecular engineering at NC State, published their paper in the Royal Society of Chemistry journal, Soft Matter.

“The project really started with [students Russ Mailen and Amber Hubbard] just trying different ink patterns in the lab. We thought it would be interesting to use thermoplastics since they are used for many applications in everyday life,” Dickey said. “We want to create materials that are initially flat and then transform into 3D objects in response to some stimuli, such as light, heat, or microwaves.”

To make their curved shapes, the team used a conventional inkjet printer to print bold, black ink lines onto a pre-strained plastic sheet. The printed sheet was then cut into a pattern and placed under a heat lamp. The black lines absorbed more energy from the light than the rest of the material, and the plastic heated and contracted at those points, creating a hinge around which the sheet can deform.

“Consider the challenge of wrapping a soccer ball with wrapping paper. It is impossible to do without crumpling the paper,” Dickey said. “The only way is with material that can deform. We are essentially using the ink to dictate where the sheet deforms in response to light, and create curvature.”

By varying the width of the printed hinges, the researchers can adjust the length and speed of the folds. Dickey and Genzer were inspired by nature: natural shapes rarely incorporate crisp folds. The team was also encouraged by watching children, who play with self-folding materials without any preconception.

“We realized the ink did not have to be confined to a line, but could be more complex,” Dickey said. By using thermoplastics rather than softer materials (which some researchers have tested as foldable material), Dickey’s team was able to develop strong, stiff objects. After the heat lamp is removed, the objects will still hold their shape, another advantage of thermoplastics over soft materials, which deform easily. That rigidity is essential for developing practical applications.

The team is now fine-tuning a predictive computational model that can create patterns to print on to sheets to produce functional objects that have both gentle curves and sharp creases.

“We want to control the deformation to create more interesting shapes like spheres,” Dickey said. “It’s more challenging to start with a desired shape, then figure out how to form it. How do you pattern ink to make something into the shape of a Pringles chip?” View current and past issues of Mechanical Engineering.

For Further Discussion
It’s more challenging to start with a desired shape, then figure out how to form it. How do you pattern ink to make something into the shape of a Pringles chip? Prof. Michael Dickey, North Carolina State University