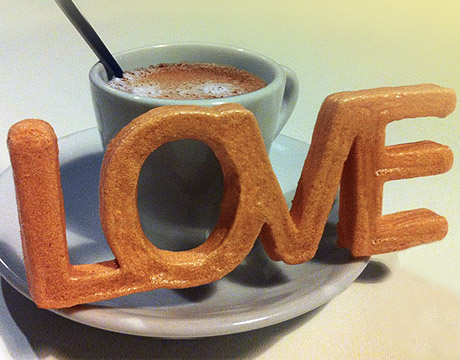 The Shape of Food to Come

A scoop of ice cream, a wedge of cake, a pat of butter: the shapes of foods can be so pedestrian. But just as no self-respecting, five-star chef would serve up just plain mashed potatoes without at least a tincture of truffle oil - or the marrow of a grass-fed caribou - so the dimensions of yesteryear’s food may soon be unfit for the serious eater’s table. The day is coming when the forms foods take will showcase a chef's flair as much as the flavor.

The folks that make up Robots in Gastronomy are bringing presentation into the third dimension. Their specialized 3D printer is allowing imaginative gourmets to serve adventurous gourmands latticed pasta, terraced ice cream, and even 3D printed cocktails.

The company’s founder, Luis Fraguada, has a background in architecture and it was his tendency to turn to programming to solve certain tasks. "I like to create tools," he says. "It's how I solve problems." So, when a Michelin-starred chef wanted to create a plate that was itself an entire meal, he turned to Fraguada. “You eat a course then flip it over and eat the next,” he says, “It was a geometric problem and a manufacturing problem: How do you work the specificity of the dish into a platonic solid.”

The project roped him into developing a kitchen-centric 3D printer. In 2010, he and his team started “hacking into existing machines.” Most of those units had a pump and a screw pushing the chosen material. But if a chef was to use multiple ingredients in multiple recipes, such a setup wasn’t going to work in terms of food safety. So Fraguada began developing a tubeless pneumatic system in which the food would touch nothing but the cartridge that contained it.

The only problem was the volume of the compressor he wanted to use. When the device was on, sous chefs, prep cooks, and other staff would not likely hear their orders from above. Fraguada switched to a quieter compressor, like the ones used with refrigerators. The ten bars of pressure it provides is enough to move most preformed comestibles, from crepe batter to hard pasta dough.

Most consumer machines have separate motors driving each axis, but Fraguada changed the firmware to allow two motors to control two different axes. “Kind of like an Etch-a-Sketch,” he says. “It allows us to keep a vertical plane, and makes the machine skinny so it cantilevers out in the y-axis.” They also added a cooled platform to keep frozen confections frozen as they print.

The biggest challenge, though, was not exactly technical. “After working with different chefs for a while, I realized that their way of thinking is different,” says Fraguada. “We are trained to understand space, how 2D goes to 3D and visa versa, and chefs kind of skip 3D, and are masters of time. They take multiple materials, cook them at different temperatures, and get them to your plate at the same time. How do you digitize this four-dimensional construct that they see in their heads? This is something that is fascinating and challenging. The mechanical things don’t compare to the complexity and character of this work flow they have in their heads.”

While chefs from the molecular gastronomy school of cooking might be eager to get their hands dirty in software, most are not likely to learn CAD. Fraguada is currently working on a chef-friendly interface that will somehow integrate the kitchen workflow.

Regardless of the interface, the printer has gone beyond producing just a novel nosh. In certain hands, it has changed the very act of eating. One chef wanted noodles to fool the senses of his eaters. His innocent-looking tubes of pasta contained unique interior structures: once bitten, the tongue would discover previously unknown “digital textures.” Another chef has been scanning the mouths of his customers to “create the perfect bite for the ideal crunch,” says Fraguada. And that 3D printed cocktail? Mix alcohol with maltodextrin and you get a powder that can be printed up as anything you like. Sex-on-the-Beach could be richly illustrated in multi-paneled reliefs before consumption. Upon first bite, though, you’d find “a certain amount of dust in your mouth,” says Fraguada. “Sometimes we do things just to try them.”

On a day-to-day basis, though, Fraguada’s experimental chefs are simply “looking for something that allows them to innovate, and to do things with more precision than they could with their own hands,” he says. “It’s no longer a cup of sugar and a dash of this and that. It’s also three psi and one-millimeter-layer height.

“We haven’t even scratched the surface of how we’ll be eating in the future.”

Learn more about the latest technologies in 3D printing at ASME's AM3D 2015.

For Further Discussion
How do you digitize this four-dimensional construct that they see in their heads? The mechanical things don’t compare to the complexity and character of this work flow they have in their heads.Luis Fraguada, founder, Robots in Gastronomy