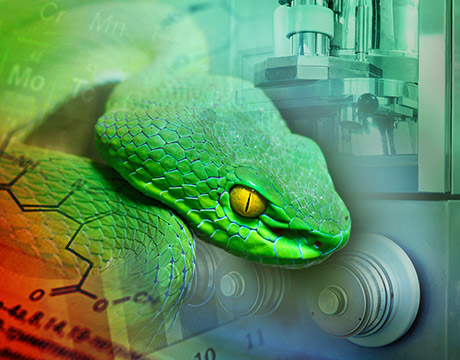 But you may not think of the skin of the snake and its keen ability to detect temperature.

Caltech mechanical engineering and applied physics professor Chiara Daraio and her team have been working on an “artificial skin” material that actually senses temperature in a way that is similar to the snake, an ability that could prove very helpful in many areas of the biomedical field.

The substance pectin was vital to the project and its involvement came about accidentally.

“Among the projects I enjoy the most are ones that involve academic freedom and how research can lead to serendipitous findings,” Daraio says. “We began by looking at properties of composite materials made within the matrix of plant cells. We created composite materials combining cells from different kinds of plants. We saw identical responses from the electrical materials, which were very sensitive to changes in the environmental temperature. It [the temperature] was changing with the outdoor temperature and humidity, allowing us to launch an investigation to answer questions of why we were seeing this temperature effect. Why are those plant cells so sensitive to these factors?”

The team spent more than a year trying to figure these things out, then stumbled on one of the active molecules that exists on plant cells: pectin.

What’s special about pectin is that it is a double-stranded molecule, the two strands connected together by doubly charged calcium ions, she says. “Imagine them unzipping like a zipper, and there is an increasing ionic conductivity of the surrounding materials,” she says. “Ultimately we extract pectin and synthesize. What we realized we had here were superior temperature sensors.”

Wide open and with many possibilities is how Daraio says one could see this working.

“For prosthetics, having a membrane that is transparent and stretchable can start to lead to brainstorming on related applications,” she says. “This is looking ahead in my mind, but I think the most obvious interaction is the ability to map temperature locally by creating temperature maps of skin in different spaces. It’s also useful for biomedical patches to monitor a wound or inflammation. It could be a sensor on different parts of the body. Or, if we’re talking about someone with diabetes, it could take the temperature of their feet or hands. You could leave it on instead of using certain medical diagnostics. It would be very gratifying if this could work and make an impact in one or more of these ways.”

In the biomechanical field, she says, it could also be used as a wraparound skin to augment robotics.

“Right now companies are creating robots that are resembling humans for household interactions, or interacting with humans in public spaces,” she says. “This kind of temperature sensitivity would work for them to interact with another robot.”

Daraio says this work is a reminder that engineers need the ability to switch gears and be ready for the unexpected. “You find yourself working on something very different than what you thought,” she says. “But surprises can make it fun.”

It would be very gratifying if this could work and make an impact in one or more of these ways.Prof. Chiara Daraio, Caltech