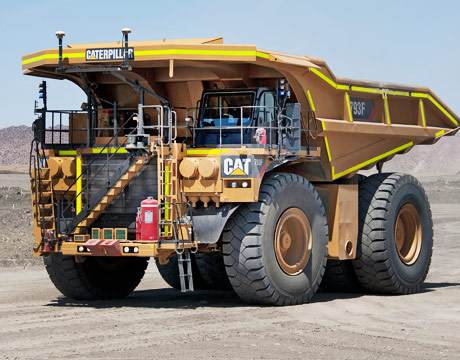 Walk around a surface mine with 430-ton, 2,600-horsepower trucks hauling material, and you might hope the drivers paid attention to your whereabouts. But if the site used autonomous mining trucks, there might be no drivers—and you’d be perfectly safe.

Although human drivers can do the job, autonomous trucks are able to drive an exact route every time without getting bored, tired, or taking time off. That elimination of human error and regular training improves safety and increases a mine’s productivity.

Mining engineers began experimenting with autonomous equipment in the mid-1990s, but it has taken time for the technology to catch up with the idea. Today, however, both Caterpillar and Komatsu manufacture autonomous mining trucks that are used at sites around the globe.

The driverless trucks offer mining companies some clear advantages. “They need fewer people at the site, plus when they’re operating 24/7 there’s never a case of human error because of fatigue,” says Michael Murphy, chief engineer of mining and technology solutions for Caterpillar. What’s more, Murphy adds, “Human drivers can veer slightly off course from time to time. The autonomous vehicles just do the job, over and over.”

To navigate around the site, each autonomous mining truck employs both radar and lidar (light detection and ranging devices) to sense objects around the vehicle. These, combined with high-precision GPS, create an overall picture of location, speed, and possible obstacles.

That information feeds into a centralized computer at the site’s control center. The computer replaces the driver’s job. It reads the truck’s navigation system and selects the best route from A to B. It also directs the truck to a particular shovel. After the truck is loaded, it proceeds to a particular dumping point. Each dump location is recorded so that two loads aren’t dropped into the same pile.

The computer is programmed with scheduling and assignment algorithms designed to maximize productivity and meet each day’s loading goals. Because of this, the routes from shovels to dumping points are extremely precise, with the trucks running the same paths over and over again. An onboard inertial navigation system acts as a backup, sending an alert if there’s a discrepancy between the guidance technologies.

The computer functions as a kind of mine air-traffic control, keeping track of everything going on within the mine’s perimeters. “If a light vehicle is moving near an autonomous truck, the system calculates if it will get in the truck’s path and when, slowing it down to avoid a collision,” Murphy says.

The system is sensitive enough to detect a human in a truck’s path—or even a kangaroo, which happens frequently at mining sites in western Australia.

Automobile engineers have visited with the Caterpillar team to pick their brains on autonomous vehicles, Murphy says. But the trucks have a different mission than an autonomous car. “Our trucks are designed to move 100 million tons of material a year safely and efficiently, but getting people around securely is more important,” he says.

If a light vehicle is moving near an autonomous truck, the system calculates if it will get in the truck’s path and when, slowing it down to avoid a collision.Michael Murphy, Caterpillar