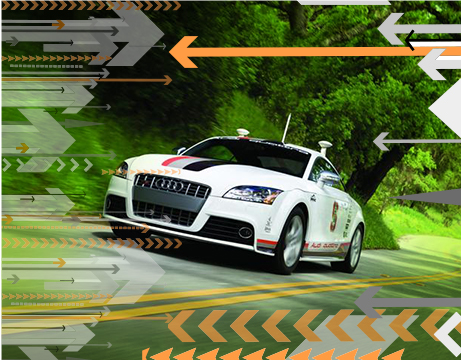 Chris Gerdes isn’t your typical car guy. Yes, he likes to drive fast and push his vehicle to the limits, but he takes the tinkering to accomplish all of that to a completely different level. Fitting an Audi TTS with a bevy of sensors that track every nuance of performance, the head of Stanford University’s Dynamic Design Lab is pushing the limits of driverless car performance. The goal is to develop better safety systems for the next generation of vehicles, whether they are driverless or not.

Already the Stanford Audi has performed on the Utah Salt Flats, climbed Pikes Peak and raced to 120 mph on California’s Thunderhill Raceway, finishing the twisting 3-mile road course in under two and a half minutes. That’s all without someone sitting behind the steering wheel, and the track time is slightly less but comparable to a standard race car driven by a professional driver.

Despite the technological advancements, Gerdes, who has a PhD in mechanical engineering, is more than impressed with human driving performance. Race car drivers process speed and braking by getting a feel for the track through the steering wheel. “It really amazes me how quickly race car drivers are able to handle this,” he says. “In a couple of laps, they can determine the car’s limits. How are they able to do it?”

To boost performance, Gerdes and his students are tapping brain waves of race car drivers to try and understand what decisions are cognitive and what are based on instinct or experience. Integrating those results with vehicle dynamic data will better use an autonomous car’s capabilities, he believes.

Gerdes has been working on autonomous driving systems since the 1990s, first on early GPS systems for farm tractors and later with Daimler Benz. In 2009 at Stanford, Volkswagen approached the design lab to help with design of robotic race cars for road and rally racing. That dovetailed with Gerdes’s vision of developing safety systems.

“If you look at what race car drivers are able to do … it could be a fantastic lesson for safety systems,” he recalls.

Stanford’s program certainly isn’t the only one looking at self-diving cars. There are many other university programs and labs, including Carnegie Mellon University, where General Motors is helping fund an automated driving research project. But all self-driving cars rely on three things: sensors for understanding the car’s surroundings, algorithms that decide what actions are needed based on sensor readings, and actuators that steer and brake the car to perform the necessary actions or maneuvers.

The Stanford Audi is fitted with a two-antennae differential GPS system, accelerometers and gyroscopes to report exactly what the car is doing on the road. Gerdes says it reports the car’s exact location to a couple of centimeters and measures how much the tires slip relative to the road, the main factor in determining how much of the tires’ capabilities are being used.

It is all about friction, says Gerdes. “When you look at the effort it takes to turn the wheels of a car, a skilled driver knows how much torque to put on the [steering] wheel,” translating into the car’s attaining peak friction capability, he says. In the lab, Gerdes and his team have figured out how to calculate friction, which is the capability of the car, or its limits, through sensors on the electric power steering system. Their algorithms that drive the car process all of the data from the sensors and arrive at a driving path and commands to the actuator.

And it seems to work remarkably well, as the Audi speeds to 120 mph on track straightaways, and slows enough to take turns efficiently. But the autonomous car can’t quite beat the speeds of a professional driver so Gerdes is looking to neuroscience and biology to try and bridge the gap.

“Signal processing is one thing we do very well in our lab,” he says. Gerdes is looking at brain waves and other data such as heart rate and temperature of race car drivers fitted with sensors and electrodes as they drive around the track. To interpret that, the team includes a post-doctoral researcher and Gerdes says the lab will soon collaborate formally with Stanford’s school of medicine. Integrating all of that biological information with the car’s dynamic data could show them how to improve the autonomous driving capabilities.

Fully autonomous driving may not be that far away. Three states—California, Nevada, and Florida—permit self-driving cars and Google is leading the way with its self-driving project. The National Highway Safety Foundation in June issued guidelines for states and is laying the groundwork for national regulations when they become commercially available. For now, the agency only wants the technology used in tests and to be fitted to allow a driver to take over in case of a malfunction.

In the near term, Gerdes envisions driverless safety systems working with drivers to help them out of dangerous situations, such as adjusting speed in a turn. Given how he and his team love to drive—a trait most likely shared by much of the motoring public—he is not keen on eliminating the driver behind the wheel. Figuring out how to make technology work cooperatively in dangerous situations is the research challenge.

While pushing the car to its limits and driving very fast provides everyone on the team with thrills, the work is all tied to developing systems for safer driving, either autonomously or with a person behind the wheel. “Ultimately we’re developing safety systems,” says Gerdes.

Register for a free webinar on the latest developments in automotive technology.