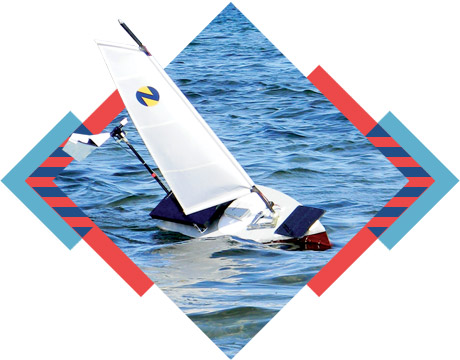 Self-Sailing Boats in the Atlantic

The autonomous automobile gets all the thunder, stirring our dreams of a technological utopia, of inattentive daily travel, of a chance to get in an extra nap on the commute. But there's another more ancient mode of travel that has made some progress in the realms of autonomy, even if it has, perhaps, stirred fewer dreams futuristic and otherwise: the sailboat.

To pump a little excitement and ingenuity into the area of robotic boating, professors Mark Neal of Aberystwyth University in Wales and Yves Briere of the Institut Supérieure de l'Aéronautique et de l'Espace in Tolouse, started the Microtransat Challenge. To win the contest, which has run every year since 2010, participants must build a sailboat, under four meters in length, which can successfully navigate, on its own, the Atlantic Ocean from the European continent to the American (or vice versa).

So far, no one's managed it.

Paul Miller, a professor in the Naval Architecture and Ocean Engineering Department at the United States Naval Academy, and his students, have tried a few times, and this year they're at it again.

"The first time was in 2014, and the boat made it out to the Grand Banks from Cape Cod and got scooped up by a scallop dragger from Canada," says Miller. "They sent me an e-mail with the best subject line I've seen. I've posted it on my door here: 'Canadians Capture U.S. Navy Vessel.' So I went up to Nova Scotia, picked it up, and they gave me a scallop dinner and were apologetic."

Miller fixed the solar panel, which had broken, and a new crop of students set about improving the programming. "The students accidentally put in a bug, so in 2015, the boat sailed a very nice course from Cape Cod to Nova Scotia, rather than out to the Atlantic; [then] sailed right into a harbor in Nova Scotia where it was picked up by a Canadian scallop dragger," says Miller. “So I went up there and picked it up and they gave me a scallop dinner."

This year Miller and his students tried two boats, ABoat Time and Trawler Bait, both of which were supposed to avoid areas of high fishing. "The first boat broke in two days,” he says. “Then the other one, we don't know for sure, but it's exhibiting all the characteristics of having been picked up by a scallop dragger. First it was doing loopers, then it went twice as fast as it's capable of going. It's either in a whale or in a boat."

Wherever the boats have wound up, a great deal of engineering went into getting them as far they've gone. Until about 2011, solar panels and computers weren't efficient enough to make such an undertaking possible. Now, a 10-Watt, 12-volt solar panel and a 5-Watt, 5-volt solar panel provide all the energy needed to turn the rudder, adjust the sail winch, and run the computer (an average of 68 milliamperes).

The boats have to be small not just to meet the criteria of the contest, but also so that they can be launched by a single person, and fit in the back of a Land Rover. The small size is really the challenge. Unmanned motorized Navy pistol boats crossed the ocean back in the 1970s. Lighter boats are slower and can't fight stronger currents as easily, "So you have to be a lot smarter with where you go and you have to be a bit luckier with the wind," Miller says. They also have to be something his students can build in two months for under $1,000.

To make sure the boats can withstand storm environments, Miller and his team subject the boats to a classic "drop test." They throw them off a pier. They also submerge the boats to be sure there are no leaks.

Of course, there's more to surviving an ocean crossing than storms and moisture. There's the simple matter of trying to find equipment with endurance. For example, Miller called the company that made the off-the-shelf rudder servo he wanted to use to find out its limit for how many cycles it would produce. "They're like, 'Oh, it'll last you for years.' And I said, 'Well, we're sending this across the Atlantic and it's going to have to operate at least three million times.' There was a long pause. Then, 'Eh, I have no idea.'" So far the servo has worked as long as the boats have managed to sail.

Once Miller has had a little more success with the ocean crossing, he plans to create progressively smaller boats: a three-foot, a two-foot, and then a one-foot. Ultimately, he hopes the boats will be used by oceanographic students for data collection.

Just how many scallop dinners it will take before that happens remains to be seen.

The boat sailed a very nice course from Cape Cod to Nova Scotia, rather than out to the Atlantic; [then] sailed right into a harbor in Nova Scotia where it was picked up by a Canadian scallop dragger.Prof. Paul Miller, United States Naval Academy