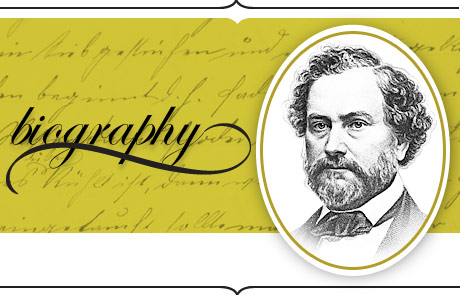 Samuel Colt, the second-youngest of seven children, was born in 1814 in Hartford, CT, to Samuel and Sarah Colt. As a young boy he showed a fascination with machinery and was adept at taking apart and reassembling equipment, especially his father's firearms. He enjoyed reading articles about inventors, gunpowder, and other explosives.

A few years after his mother died of tuberculosis, Colt took a job in his father's textile mill. For Colt, with access to tools and materials and skilled workers who could help him build prototypes, it was an inventor's paradise. Some of his creations included a galvanic cell and underwater explosives. Later, while attending a boarding school, a pyrotechnical display he put on for fellow students resulted in a fire; he was dismissed and his father sent him to sea to learn other skills. Little did his father know that being on the ocean, and watching the captain's wheel with an inventor's eye, would give him the idea for inventing a handgun with a rotating cylinder.

With his interest in weapons renewed, Colt came home in 1832 and pursued developing his ideas in earnest. Funding was scarce; to raise money he travelled the country and Canada giving laughing gas (nitrous oxide) demonstrations to appreciative audiences—the first real display of his marketing and entertainment skills. With this money he hired gunsmiths to design his prototypes. In 1836, Colt received a patent for his revolving-barrel handgun called the Colt Paterson.

This was poor timing—due to a lack of U.S. military activity, sales were so slow that the ever-restless Colt began to design underwater explosives, remote-control detonators, and waterproof copper cable coated in tar (this was of special interest to Samuel Morse, who used it when he ran telegraph lines under bodies of water).

With the onset of the Mexican American War in 1846, Captain Samuel Walker of the Texas Rangers visited Colt in New York City and placed an order for 1,000 revolvers; however, Walker wanted an improved version that would hold six bullets, be easier to reload, and be powerful enough to kill a man with a single shot. Colt made the changes and the lucrative order established him as one of the leading gun-makers in the country. The weapon gave outnumbered troops a strong advantage; one officer commented that 30 soldiers armed with Colt revolvers were able to hold off a force of 500 Mexican soldiers.

Colt's business rapidly expanded. He purchased property along the Connecticut River and built a large-scale factory called the Colt Armory in 1855. Following his aggressive business instincts, Colt equipped the factory with the most advanced metal-working machinery possible; he also utilized the first successful assembly line to speed production, turning out 5,000 finished revolvers in the first year of operation. He did insist, however, that the final product was finished and polished by hand.

The Civil War erupted six years later, making Colt an extremely wealthy man. He sold guns to both the northern and southern armies; later his "Colt 45" (also known as the "Peacemaker") was one of the most popular guns on the western frontier. Colt died of gout in Hartford in 1862—his fortune was estimated at about $15 million (about $350-$400 million by today's standards). The company didn't suffer with the loss of its leader—his wife Elizabeth assumed control and the company continued to thrive.

Not only was Colt a brilliant inventor who transformed the weapons industry, he is often recognized as a hard-driving industrialist and marketer who launched America's own Industrial Revolution with his machining and production innovations. In 2006, Colt was inducted into the National Inventors Hall of Fame.

The Colt 45 (also known as the "Peacemaker") was one of the most popular weapons on the western frontier.