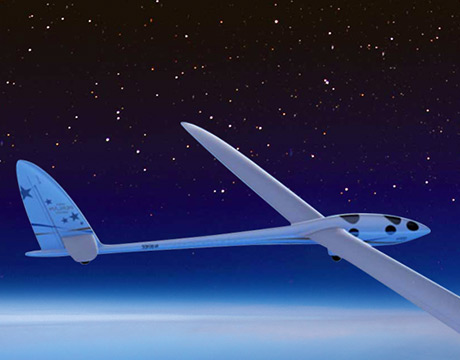 Sailing into the Stratosphere

90,000 feet in the air is just below the threshold for suborbital travel, nowhere near the normal altitude of the average airplane. Yet, according to Ed Warnock, CEO of the Perlan Project, his goal is to change that, utilizing a sailplane to reach such soaring heights. Why? The answer, according their website, is “to explore the science of giant mountain waves that help create the ozone hole and change global climate models. This will require the engineering of a spacecraft with glider wings that can fly in less than 3% of normal air density and at temperatures of minus 70 degrees C, conditions approximating the surface of Mars.”

“We want to expand wind-borne flight to where we haven’t had orbital flight possible before,” Warnock says. “It approximates conditions on the planet Mars, so it’s even testing winged aircraft to see what its limitations would be there.”

Back on Earth, when soaring in mountain waves, if a plane has too much drag, the lift in the wave is not sufficient to keep you rising, explains Warnock, who received his bachelor'sdegree in aerospace engineering from the University of Arizona. “We need to have a very efficient airplane for this as far as drag goes, so the little bit of updraft will carry the airplane,” he explains. “The air speed indicator in the cockpit is generated by air being rammed down a tube. We will fly between 45 and 100 knots indicated air speed, but as air gets thinnerit takes more air ramming down this tube to make the air speed indicator react. It takes more air passing over the wings to generate the lift we need, so we will be actually going faster than our indicated air speed. At the highest attitudes, it will be flying 400 miles per hour, true air speed.”

The Airbus Perlan 2 weighs about 1,900 pounds flight-ready, with two pilots onboard. The plane is 84 feet wide in the wingspan, 33.3 feet long, and the body is made almost entirely of carbon fiber.

“The wings are designed for very thin air and relatively high speed through the air,” he says. “The wing shape is probably pretty close to what you would see on a model airplane. It’s reasonably thick compared to its length.”

Warnock says one person he talked to may have summed it up best. “They said, ‘If aviation were a language, a sailplane would be language as poetry.’ The sailplane is quiet, a sense of being one with the atmosphere as you fly it. It’s like the difference between sailing and motor-boating.”

The second goal for the Perlan Project is to study the impact of these mountain waves, which are the largest waves on the planet, partly to understand how theyhave an impact on weather, he says.

“We know these waves are the primary cause of the ozone hole, and we also know that they can get steep sometimes, that they turn into tumbling, breaking waves,” Warnock says. “Some of the more significant turbulence on the planet are these mountain waves breaking and causing the stratosphere to mix and it mixes energy and particles vertically and has a downstream effect on weather.”

Part of the intense testing regimen is flutter analysis, in which researchers locate the harmonic points where there would be fluttering or shaking that can cause an aircraft to break up in flight, he says.

“We test to see if harmonic shaking is going on and we do that by vibrating the aircraft at specific frequencies using accelerometers to note if the plane has the frequency linger, for example,” Warnock says. “We run flutter allowances and send it to the company ATA, an aerospace company specializing in flutter analysis. They tell us if we have flutter modes that could be dangerous. If not, we keep going higher and higher and test every five thousand feet.”

A final goal is to encourage young people throughout the project, giving some students a chance to be involved in the experience in a very different way. Part of the stated mission of the Perlan Project reads: “These missions will provide education and inspiration for young people seeking careers of exploration and adventure in engineering and science.”

“We allow students to give us experiments of theirs to see the effect of flight,” Warnock says. “We’re just like them. We’re in awe of what flight can be. We want to share the enthusiasm.”

For Further Discussion
We’re just like them [student engineers]. We’re in awe of what flight can be. We want to share the enthusiasm. Ed Warnock, CEO, The Perlan Project