Sailing Above and Below Water to Generate Power

Sailing Above and Below Water to Generate Power 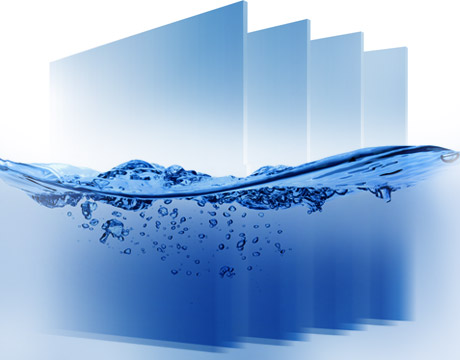 There are times when the simplest of solutions remains hidden in plain sight. That is the scenario Hans Dysarsz is facing in his quest to flesh out and commercialize a system of renewable energy so simple he says it does not even qualify as new technology. It is based on the “reaction ferry” propulsion approach, thought to be first described by Leonardo da Vinci, where a ferry boat tethered to an upstream cable moves from one river bank to the opposite side simply from the kinetic energy of flowing water.

That kinetic energy could be “harvested” using a lighter array of foils, similar to a ship’s sails, moving above or below the water. If placed above the water, the foil would operate with wind; if placed below the water line, it would move from the flow. Either way, it would produce electricity generated from mechanical energy in the form of the pulling action of the foil, which would be used to drive generators.

“People have simply overlooked this,” says Dysarsz of the concept. “This is a very simple way for kinetic energy to be turned into usable mechanical energy, and it is clean. But forget ‘clean.’ It is simply cheaper.”

Reaction ferries have operated in Canada for over 100 years. Dysarsz studied one on the Fraser River in Lytton, British Columbia, that operates in extreme conditions, including ice flows and logs. Based on the season, it operates with up to a 50-foot water level change and flow changes from 1,500 cubic meters per second to over 12,000 c/m/s. Its operating costs are negligible.

Dysarsz, a pilot by training who calls himself a “closet engineer,” says the idea of using a reaction ferry as a source of power generation was a “complete fluke.” Flying throughout Alaska and Canada’s northwest exposed him to the few reaction ferries still used in British Columbia. He claims small systems of 1,000 Watts could be built by virtually anyone using basic tools and materials. Systems of up to 10,000 Watts could be built by semi-skilled workers using off-the-shelf components. Further, the system could pull about 1 MW to 1.5 MW from river or ocean flow using a similarbut more robust design,he says.

The Hydrokinetic Shuttle Foil approach is obscure, but some research has been done by Canadian universities and the National Research Council of Canada. Mechanical engineering students at the University of Victoria recently conducted a modeling program for a wind shuttle foil system. In 2016, Dysarsz tested the system at a water flume of Northwest Hydraulic Consultants Inc., in North Vancouver, British Columbia.

Dysarsz, who founded Da Vinci Energy, Inc. in Vancouver to develop the system, says the tests were successful. Using a foil array in very slow flows of .32 to .55 meters per second with a shuttle velocity of .5 meters per second, it produced 16.6 pounds of static thrust, he says. “We thought we would get five to six,” he adds. The tests also generated six volts of power and one amp, using wheel barrow ball bearings, “not exactly low friction,” he notes.

To adapt the system to produce energy, a number of foils would attach to a cable strung above or below a river, similar to clothes on a clothes line. The wind or current would move them back and forth, and the mechanical energy captured and converted to electricity with generators placed on shore. Dysarsz says it could be adapted for the ocean, with the foils operating between barges anchored to the ocean floor, similar to what is done in offshore oil and gas development. At that scale, it could produce megawatts of energy, he claims.

“It amounts to a bedsheet on a clothes line,” he says. “The turning action of the pulley provides mechanical energy. You just have to apply 21st century controls and materials.”

The scheme’s basic simplicity makes it attractive, especially in isolated areas or the developing world. “We want to get it out to who really needs it, and at a reasonable cost,” says Dysarsz, noting it could be adapted to a range of water flow, providing enough power to turn an Archimedes screw for irrigation. “The cost would be cheap.”

Curran Crawford is an assistant professor of mechanical engineering at the University of Victoria with a background in wind energy and who oversaw a modeling project of the technology. He calls the concept “interesting” but cautions that much more work needs to be done to research and refine the engineering.

“From a raw technology perspective, [wind systems] look the same,” he says. The foil approach differs from wind turbines with rotors as the “outer part of the rotor is doing more of the generation. With a foil, the whole piece is doing the work. This needs more on detailed engineering. We haven’t had the funding to delve into more detail.”

Other rotorless wind systems are in development in various countries, including one using gliders tethered to the ground, notes Crawford. Others are working with kites, both in the sky and underwater, tethered to the ocean floor. Researchers at Worcester Polytechnical University have been working on a concept know as TUSK-Tethered Undersea Kite. The scheme uses a rigid-wing kite fitted with an axial-flow turbine attached to the floor with a tether. As it “flys” through the current, electricity is generated and transmitted to a floating buoy and on to the power grid. Velocity and the generated power are increased because the mounted turbine is in motion, and not fixed.

Both have the promise of producing extremely cheap power. Based on known installed costs for reaction ferries worldwide, Dysarsz says ½ cent per kWh is feasible, and could be lower for ocean current or tidal installations. That can also provide a cheap way to produce hydrogen or compressed air, notes Dysarsz. It also poses little to no environmental impact. The foils move slowly enough to allow birds or fish to pass and there is no need to dam a river.

Dysarsz hopes to develop the technology as a nonprofit. Based on projections for delivering inexpensive electricity, he believes it is both ideal for developing nations and could be potentially taken a step or two further to produce hydrogen or compressed air. Both could be used for clean energy development.

Maximizing its potential is probably tied to ocean or tidal development. “There’s so much energy in ocean or tidal flows, it could easily be ramped up,” he says. “You don’t need to put this anywhere near where people live.”

For Further Discussion
It amounts to a bedsheet on a clothes line. The turning action of the pulley provides mechanical energy. You just have to apply 21st century controls and materials. Hans Dysarcz, Da Vinci Energy, Inc.