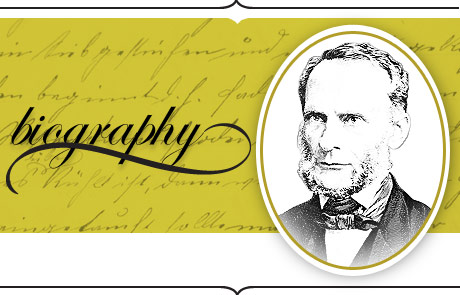 Rudolf Julius Emanuel Clausius, one of Europe's elite theoretical physicists, was born in Köslin, Poland, in 1822. He received an excellent education, both at a small private school his father founded and Gymnasium in Stettin (now Szczecin, Poland), from which he graduated in 1840, at age 18. By all accounts he was a popular, well-respected student. His brother Robert wrote that "all intimate with him learnt to esteem his reliability and truthfulness... The greatest confidence and trust were placed in him. His judgment was highly valued."

Clausius enrolled at the University of Berlin, where he studied mathematics and physics with other students who became noted scientists, including Gustav Magnus, Jakob Steiner, and Johann Dirichlet. After graduating in 1844, he attended the University of Halle, where he received his doctorate in 1847 for studying the optical effects of the Earth's atmosphere. His thesis proposed that the multiple colors of the sky were a result of the refraction and reflection of light.

In 1850, the year Clausius was appointed professor of physics in the royal artillery and engineering school at Berlin, his first paper on the mechanical theory of heat was published. Entitled "On the Moving Force of Heat and the Laws of Heat which May Be Deduced Therefrom," the paper explained his advanced ideas on heat and work, including the discrepancies he thought existed between Carnot's principle and the concept of conservation of energy.

"In all cases where work is produced by heat, a quantity of heat proportional to the work done is expended; and inversely, by the expenditure of a like quantity of work, the same amount of heat may be produced," he wrote.

Clausius also stated the assumptions supporting the popular concept of caloric theory were wrong and redefined the two laws of thermodynamics to overcome this contradiction. He also provided explanations of the nature of free heat and latent heat. This paper drew considerable attention and greatly elevated his standing in the scientific community.

From 1855 to 1867 he served as professor of physics at ETH Zürich, the Swiss Federal Institute of Technology in Zürich. These 12 years were a tremendously productive time for Clausius. He expanded the existing gas-kinetic model and provided a theoretical framework that explained translational, rotational, and vibrational molecular motions. He also introduced the concept of mean free path.

In 1865, Clausius presented the first mathematical explanation for the concept of entropy, which he also named. One of his tenets was entropy can never decrease in a physical process and can only remain constant in a reversible process. He also stated the First and Second Laws of thermodynamics in the following forms: 1) The energy of the universe is constant, and 2) the entropy of the universe tends to a maximum.

Living in Bonn in 1870, Clausius organized an ambulance corps of Bonn students to serve in the Franco-Prussian War. He was wounded in battle, leaving him with constant pain and a lasting disability. He was awarded the Iron Cross for his services at the battles of Vionville and Gravelotte. In 1875 his wife died in childbirth, leaving him to raise their six children alone. Although he continued to teach, his health issues and parenting responsibilities left him less time for research. Clausius died in Bonn in 1888.

Clausius brought a mathematical approach to solving some of the most challenging problems in molecular physics. His revaluation of Carnot's groundbreaking work with steam engines to create a mathematical model for heat, as well as his concept of entropy, advanced the field of thermodynamics and laid a broad foundation for the next generation of scientists.

In 1865, Clausius presented the first mathematical explanation for the concept of entropy, which he also named.