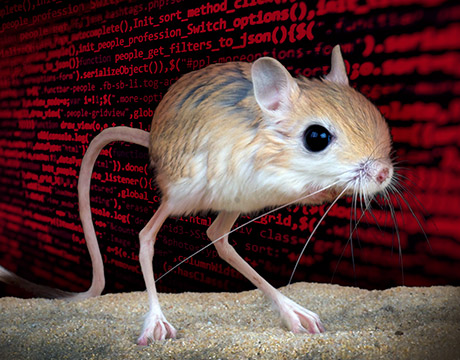 The Jerboa, a bipedal desert rodent, is being studied to advance bipedal robots.

The rodent is usually considered one of the most disgusting animals to us humans. But to Ram Vasudevan, assistant professor of mechanical engineering at the University of Michigan, they are quite beautiful. Well, certain types of rodents are at least, such as the ones that have helped him advance the field of robotics.

Learning of the work of a colleague who was focusing on the evolutionary side of hopping rodents led to a collaboration and quest that could go leaps and bounds toward moving robotics forward.

“I’m interested in locomotion in animals, humans, and robots,” Vasudevan said. Speaking of the Jerboa, the bipedal desert rodent on which he based his research, he said, “This type of animal? Well, this one isn’t like conventional rodents at all. They have really long legs, kangaroo-like legs, that have morphologically independently evolved on multiple deserts throughout the world. The question is can we draw insights from this type of leg to build or control robotics.”

The legs, in fact, actually exceed the animal’s body length. According to Vasudevan, normally a rodent has haunches that are maybe a quarter or a fifth of its length, but these spring-like legs are on the order of two to three times their body length. As an aside, he says they also have a different demeanor from most rodents, and can be quite friendly, often willing to sit in your hand without biting.

Vasudevan believes studying these rodents and their gait could help engineers create biomimetic robots to match specific environments such as desert planets or desert environments on Earth.

Though the legs certainly provide entertainment with the air it allows the rodent to get, the scientific question his team faced was why would it be worthwhile for rodents to even exist on two legs rather than four? “Typically you take animals in these situations and put them on a treadmill and they take a standard motion,” he says. “So does a human. They start jogging or running, or a horse is galloping, and this is a function of the treadmill’s speed. If a fast speed rate is put in, you will be running, if slower then you’re walking. But these bipedal rodents didn’t do that. They would run or jump to move and they would move as randomly as possible.”

They also travel long distances to get food while their quadruped counterparts don’t. “What you see is that randomized gaits are less susceptible to being attacked because they can’t easily be predicted and the other [animals and rodents] were more susceptible,” he says. “My colleague Talia Moore noticed this in a desert environment and had questions on how to measure this. So we discussed data and why it was useful and how useful.”

The colleague collected some of the data by using a camera-based system in the desert and moving towards the Jerboas to see their reaction in moving away.

Entropy was also utilized, characterized as how much information a particular signal can contain, he says. “It is in a sense, measuring how random a signal can be. The more random it is, the more information it can potentially connect. What we developed was a technique to characterize the entropy of the animals from the data we collected. We measured how random they were and compared it to their four-legged counterparts and measured their entropy as well.”

For Vasudevan, he believes this can lead to incredible advances in robotics. “Unpredictability in robots can be a next step,” he says. “Can they get outside of patterns and are there advantages such as how it helps the life span of these creatures.”

For Further Discussion
Unpredictability in robots can be a next step. Can they get outside of patterns and are there advantages such as how it helps the life span of these creatures.Prof. Ram Vasudevan, University of Michigan