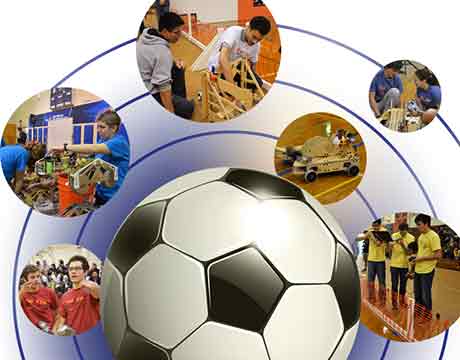 Caltech’s engineering design laboratory class was out to enjoy a little competition--but one student didn’t expect the robotics challenge to be like this.

“When we were told it would be a soccer competition, we learned you could have up to three robots,” says Juliane Preimesberger, a junior majoring in mechanical engineering. “We knew it would be a lot of work but it was the way to go.”

A 2 x 4 bump would be in the way on the course and there would be two goals, one at ground level and the other beginning a foot off the ground. “We were going to have robots of different specialties, deciding to build two offensive robots and one defensive, with the defensive robot blocking the goal,” she says.

Her team, named “Blitzkrieg Bots,” ultimately went with four motors for each robot, giving them a maximum speed of 3,500 rpm and maximum torque of 2.27 millimeters, she says.

As far as materials, they were torn between aluminum and wood. “In the end, we decided on plywood because of sturdiness,"she says. "It was fun testing it. We hammered it, we threw it across the room, and more.”

They also needed to figure out how to connect the various pieces of the frame so they used more than 200 combined pieces of wood when calculated for the three robots. They could be machined rapidly with a CNC mill.

The completed robots were controlled with Xbox controllers. “We had a receiver connect between Arduino and the robot, testing first to see if it would move and then would it move the way we wanted it to,” she says. “By the time the competition came we all learned how to control the robots but we picked certain people to be our drivers. We had a mock competition a few weeks before where the whole class got together and played against each other and we were able to see how the robots were doing against other teams.”

Then it was time for the competition that counted and Preimesberger says it was a bit tense. “We were varying degrees of anxious,” she recalls. “There was a round robin where you’re playing all of the teams and that eliminated one. Now four teams remained for two semifinalist games and then a finalist game.”

And Then There Were Two

Finding themselves in the final, Preimesberger says there was a big potential problem. “Our opponent had the ability to hit the higher goal, worth three points, and the lower goal was only worth one point,” she says. “They had some sort of elevator shaft it seemed and it allowed them to pick up the ball and raise it up.”

The crowd was very into it, Preimesberger recalls, with students from multiple elementary schools among the attendees.

In the end, victory belonged to her team. “We didn’t beat them by a lot but we were happy to get the win,” she says. “We worked on this a long time and it felt great to see our robots working well.”

And the victory was more than just scoreboard deep. “I learned so much about the design process from the project: what you have to do when given a problem, bringing ideas, prototyping, and going back to the drawing board when things don’t work out,” she says. “I also learned a great deal on the electrical side and wiring. I have to say that it was a very good experience in working on a team, getting a sense of strengths and weaknesses, and getting a better understanding on how to allocate.”

I have to say that it was a very good experience in working on a team, getting a sense of strengths and weaknesses, and getting a better understanding on how to allocate. Juliane Preimesberger, Caltech