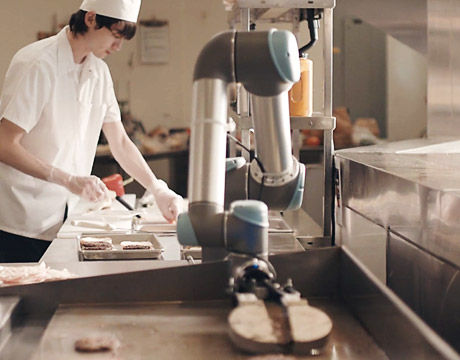 Robots in the Kitchen and at the Table

“Hello, my name is C-3PO and I’ll be your server today.” Diners may soon be experiencing this greeting, with C-3PO then sending your order to Wall-E or Optimus Prime in the kitchen.

A version of that future is already showing up in our everyday lives. Robotics companies are creating robots to handle tasks including food preparation, cooking, and serving.

Prof. Martial Hebert [no relation to writer], director of the Robotics Institute at Carnegie Mellon University, says he anticipates an explosion of work and investment in this field. It follows the increased development in agricultural-related robotics.

“It’s a logical next topic for robotics, with a huge market,” Hebert says.

Miso Robotics has created Flippy, a kitchen assistant robot that can work a cooktop, prep food for cooking, and plate meals. The robot wascreated for CaliBurger, an international fast casual chain specializing in Southern California style hamburgers. The firm is looking to automate as much of the food preparation as possible.

Flippy uses cameras and sensors to perform tasks. A screen allows a person in the kitchen to monitor what Flippy is doing. The robot can also move away so a cook can step in.

When the company was being formed in 2016, says Miso co-founder and CEO David Zito, they were looking at new industries where robots could be used. Commercial kitchens seemed like a natural fit, both in terms of function and the market.

“Everybody eats,” he says. “Robotics are broadly applicable in that environment.”

Commercial kitchens present unique challenges for robots. They have to be designed to work with people in tight spaces. There’s also heat, smoke, grease, steam, and water to contend with.

“Robots work in much more difficult, dangerous environments,” Hebert says. “They work in mines, and go into disaster sites. So it’s not an obstacle.” Still, robotic arms are not cheap, andthey have to be accurate to within less than a millimeter.

The biggest challenge is what the robots are working with, says Hebert. In other fields, robots usually work with rigid materials such as rock, metal, or plastic. Foods like ground meat and tomato slices are definitely not rigid. They are also more fragile, and may be packaged in wrapping.

“That’s where designing custom hardware comes in,” Hebert says. “You have to have a creative approach. You can’t go with standard grippers.” The variables involved in food preparation also pose a challenge. Food changes shape, size, color and texture during cooking, Zito points out.

“Sensing and perception are used when making food,” Hebert says. “You have to design on a case-by-case basis for what food will be made.”

Zito explains that the sensors on Flippy were put slightly off-center, to look from a chef’s vantage point and not be directly over the heat.

Food safety is another priority. The robots have to be washable to stay clean, which means they have to able to handle water. The materials that come in contact with the food have to be food-safe. Flippy, for example, has an Ingress Protection rating of 67, which means it can handle being immersed in water for up to 30 minutes.

Robots are being put to work out front in the restaurant industry as well. In countries such as China and Pakistan, restaurants are using robots to take orders and serve food. Pizza Hut has added robots called Pepper, made by Japanese company SoftBank, to restaurants in Asia.

Robot waiters haven’t been a hit in all facets of food service. Chinese restaurant chain Hewelai found out the hard way after investing in robot waitstaff for three restaurants, at a cost of more than $7,000 per robot. There were problems from the start, as the robots frequently broke down, and were unable to perform essential tasks such as taking orders, pouring drinks, or carrying bowls of soup. Two of the restaurants closed.

Zito says robots like Flippy are just the beginning.

One area where robotics may work in food service is inventory. Schnucks, a chain of grocery stores in the St. Louis area, is using robots to verify pricing, and to check the shelves for out-of-stock items so they can be restocked.

Miso is getting interest from other restaurants for robots that can perform tasks such as cutting produce, dredging chicken for deep-frying, and preparing food in a sous vide, where the food is vacuum-sealed in a bag then cooked in water. It’s a very precise technique used in high-end restaurants.

“People who are spending $150 on a Waygu steak want it prepared just the way they want it,” Zito says. With artificial intelligence and cloud access, robots can adapt, learn, and improve, he adds.

“It’s like the Tesla, where it gets better with updgrades,” he says. “You don’t have to run out and buy a new version. We’re translating that idea from software into the physical.”

For Further Discussion
Sensing and perception are used when making food. You have to design on a case-by-case basis for what food will be made. Prof. Martial Hebert, Carnegie Mellon University