Robots Help Those with Autism Communicate

Robots Help Those with Autism Communicate 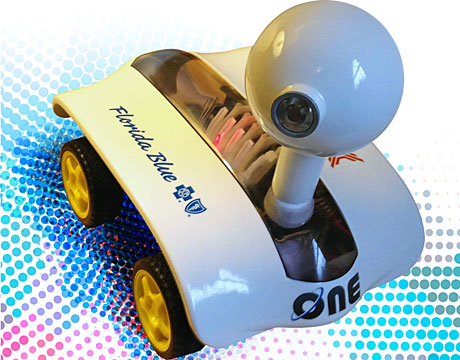 The ROBAUTO robot is created for the teaching and therapy of people with autism. Robot image: Robauto.co

According to the Centers for Disease Control, about 1.5% of American childrenhave autism, making it more prevalent than juvenile diabetes, Down’s syndrome, childhood cancer, and cystic fibrosis combined. One of the biggest frustrations for people with autism is the difficulty they have in communicating with others, or interacting with the outside world. Many families that struggle to find ways to engage with autistic family members find the tools that are available are complex, often inaccessible, and expensive.

Help, however, is on the way—ROBAUTO, a robotics startup company in Boulder, CO, is hard at work building an affordable robot companion for autistic people that helps them communicate and interact with their environment.

“Human responses from robots are distinctive from human responses from other computers and devices,” says Jalali Hartman, “chief human” for ROBAUTO. “Our area of research centers on the autism spectrum. We have noticed that many individuals on the autism spectrum seem to prefer to communicate through a robot rather than directly to another human. This is significant from a teaching, companionship, and therapy perspective.”

ROBAUTO’s engineering challenge is to create a robot that is low-cost, efficient, and durable, with a flexible persona that a user (or a group) can relate to. Although there is plenty of autism software on the market, Hartman notes, autistic people do not engage with these programs consistently. “Robots really seem to help with this,” he says. “The relationship is most important. Our approach was to build a platform that can be coupled with any form and then customized to the user’s needs.”

Hartman developed the first prototype with assistance from autistic adults at a special-needs center in Florida. More than 500 parents, teachers, and individuals with autism have provided input on the design. Hartman and his team quickly realized there was little interest from autistic participants in the “bells and whistles” found on the more expensive and complex robots on the market; therefore he decided to keep the robot functions simple.

“We have developed an algorithm that allows us to test various forms, sounds, and messaging to determine the type of device each individual needs,” says Hartman. “We measure the algorithm by making modifications to the robot and then measuring response.”

The result is ROBAUTO’s ONE, a four-wheeled vehicle with a spherical head that can move, talk, and record interactions with users. It is the first iteration of a Linux-based platform that will allow ROBAUTO’s team to better understand the autism spectrum. A speech element allows it to repeat whatever the user says. This is beneficial for people who want to practice their speech in a safe, private environment. ONE is also durable enough for racing, which helps autistic users develop social skills through fun-based activities. The robot prototype uses a flexible Raspberry Pi board and is open and expandable to run a variety of teaching and entertainment programs via the Internet.

Hartman is undertaking additional pilot studies with some Colorado organizations, in conjunction with the Longmont Public Library and the Autism Society of Colorado. He has also enlisted the help of teenagers (both nonautistic and autistic) to design, build, and test the second version of robot and its platform. “Our hope is that by creating a flexible platform with lots of users interacting with it, we can start to physically map the autism spectrum—something that, to my knowledge, has never been done,”he adds.

Math, programming, and engineering capabilities seem to be especially strong among those with autism. “I'm very interested in the aptitude for mechanical engineering and electrical engineering that some of these kids have,” says Hartman. “If we can help individuals overcome and manage their social inhibitions and communication barriers, I believe we’ll find that many people on the autism spectrum are highly talented engineers.”

For Further Discussion
Many individuals on the autism spectrum seem to prefer to communicate through a robot, rather than directly to another human.Jalali Hartman, “Chief Human,” ROBAUTO